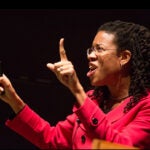 By Kate Hoagland Ash Center for Democratic Governance and Innovation

What motivates people across the globe to risk their lives to fight for democracy? And why do authoritarian regimes survive despite the recent expansion of democracy around the world?

With the film “A Whisper to a Roar” as a backdrop, panelists on Monday sought an answer to these elusive questions. The panel, which included the Egyptian Democratic Academy activist Esraa Abdel Fattah, the Slate Magazine journalist William Dobson, the film director Ben Moses, and Harvard Kennedy School (HKS) Professor Tarek Masoud, addressed a capacity crowd at the HKS screening of the documentary. The event, part of the center’s focus on the relationship between democratic governance and persistent urgent social challenges, launched the Ash Center for Democratic Governance and Innovation’s spring Democracy Seminar series.

“A Whisper to a Roar” follows the struggles of pro-democracy activists and political leaders in five authoritarian countries — Egypt, Malaysia, Ukraine, Venezuela, and Zimbabwe — and is based on the work of Larry Diamond, a renowned democracy scholar and author of the 2008 book “The Spirit of Democracy: The Struggle to Build Free Societies Throughout the World.” (Diamond was also an Ash Center Democracy Seminar speaker in 2009.)

Masoud, who was the panel’s moderator, served as a leading commentator on the film’s focus on the 2011 revolution in Egypt. During the post-film discussion he questioned the nature and durability of authoritarianism.

“Even when you get rid of a dictator, why does authoritarianism still remain?” he asked, citing the countries the film profiled as examples of non-democracies with weak political rights and civil liberties despite the work of pro-democracy activists.

Moses, the director, responded that “democracy is never over,” and that it can often be harder to maintain a democracy than to establish one — a point stressed by the film’s lack of a happy ending.

In the film, Abdel Fattah expressed her belief that positive change would eventually occur in Egypt, and she reiterated that sentiment during the HKS discussion. “I am still optimistic, even with everything that has happened in our country,” she said. “In Egypt, we are in the second wave of revolution and it is a healthy thing.” Abdel Fattah predicted that Egyptians will continue to protest until the country achieves genuine democracy, and urged hope for a better future rather than pessimism about the current state of government.

The film also tracked the work of student protest groups in Venezuela led by Roberto Patiño against the policies and practices of President Hugo Chávez. Dobson, the Slate editor, praised the effectiveness of the protests, noting that, “The youth had higher approval ratings than the Catholic Church,” in part because they avoided political rhetoric and chose more creative messaging to reach a moderate constituency. Drawing on Venezuelans’ pride in their success in the Miss Universe contest, student activists used campaign posters of an aged beauty queen with a crown to compare Chávez’s rule to having a “Miss Venezuela for life.”

“I think this movie comes as a reminder that freedom is priceless and you can’t quantify it. We need to fight for it every day,” said Halimatou Hima Moussa Dioula, a student at HKS who attended the Ash Center event.

The film screening was co-sponsored by Harvard Kennedy School’s Ash Center for Democratic Governance and Innovation and the Middle East Initiative of the Belfer Center for Science and International Affairs. The Ash Center’s spring Democracy Seminar series continues on Feb. 13 with Nicholas Cull from the University of Southern California.