A treatment for ALS? 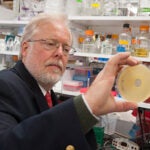 Results from a meta-analysis of 11 independent amyotrophic lateral sclerosis (ALS) research studies are giving hope to the ALS community by showing, for the first time, that the fatal disease may be treatable.

“This significant research will help us better understand the mechanisms underlying motor neuron diseases,” said Yang (Ted) Teng, Harvard Medical School associate professor of surgery at the Harvard-affiliated Brigham and Women’s Hospital and one of the study’s co-lead authors. Teng is also director of the Spinal Cord Injury and Stem Cell Biology Research Laboratory in the Department of Neurosurgery at Brigham and Women’s.

ALS causes nerve cells in the spinal cord to die, eventually taking away a person’s ability to move or even breathe. A decade of research conducted at multiple institutions showed, however, that when neural stem cells were transplanted into multilevels of the spinal cord of a mouse model with familial ALS, disease onset and progression slowed, motor and breathing function improved, and treated mice survived three to four times longer than untreated mice.

A summary of the findings from all 11 studies was published online in December in Science Translational Medicine.

“This work sheds new light on detrimental roles played by non-neuronal cells in triggering motor neuron death, and these events should be targeted for developing more effective therapeutics to treat ALS,” Teng said.

Researchers observed improved motor performance and respiratory function in the treated mice. The neural stem cell transplant also slowed the disease’s progression. Twenty-five percent of the treated ALS mice in the study survived for one year or more — roughly three to four times longer than the untreated mice.

“This is not a cure for ALS,” said Teng, who is one of the principal investigators of Project ALS’ consortium project. “But it shows the potential that mechanisms used by neural stem cells in our study have for improving an ALS patient’s quality of life and length of life.”