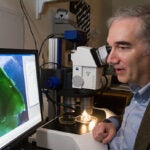 Though the genetic code, the cell’s set of rules for transcribing DNA into RNA and translating RNA into proteins, has been understood for decades, scientists have puzzled over what seemed like a mathematical incongruity in the system. To manufacture proteins, cells rely on RNA, which like DNA is made up of nucleotides that have one of four bases. Cells “read” those bases in groups of three to translate RNA into  amino acids, which are used to build proteins.

While there are 64 possible ways to combine four bases into groups of three, called codons, the translation process uses only 20 amino acids. To account for the difference, multiple codons translate to the same amino acid. Leucine, for example, can be encoded in six ways.

Scientists, however, have long speculated whether those seemingly synonymous codons truly produced the same amino acids, or whether they represented a second, hidden genetic code. Harvard researchers have deciphered that second code, and the answer may hold hope for developing new techniques to combat resistant bacteria.

As described in a paper published online in the Proceedings of the National Academy of Sciences on Dec. 31, Arvind R. Subramaniam, a postdoctoral fellow in molecular and cellular biology, and Philippe Cluzel, professor of molecular and cellular biology and Gordon McKay Professor of Applied Physics, show that those seemingly synonymous parts of the genetic code are anything but. Under some stressful conditions, the researchers found, certain sequences manufacture proteins efficiently, while others — which are ostensibly identical — produce almost none.

“It’s really quite remarkable, because it’s a very simple mechanism,” Subramaniam said. “Many researchers have tried to determine whether using different codons affects protein levels, but no one had thought that maybe you need to look at it under the right conditions to see this.”

The first step, Subramaniam said, involved creating multiple copies of a gene that manufactures a fluorescent protein. To understand how the synonymous parts of the genetic code affect protein production, each version of the gene was designed to use a single way to code for a specific amino acid. In the case of serine, which can be encoded six ways, researchers created six versions of the gene. Those genes were then inserted into E. coli bacteria. Next, the E. coli bacteria experienced a stressful change in their environment. They were starved of amino acids, and the results were startling.

The difference, he said, lay with molecules called transfer RNA, or tRNA, which ferry amino acids to the cellular machinery that manufactures proteins.

“What we found was that some of these tRNA molecules are much more efficient at being loaded with amino acids, while others are less so,” Subramaniam said. “If these tRNA molecules can’t deliver the amino acid to where it needs to be, the cell cannot manufacture the proteins it needs. In an environment where amino acids are in short supply, that ability to hold onto them becomes very important.”

While the system helps cells to make certain proteins efficiently under stressful conditions, it also acts as a biological failsafe, allowing the near-complete shutdown in the production of other proteins as a way to preserve limited resources.

“One area that I’m interested in exploring is cancer,” he said. “We know that cancer cells grow very fast. As a result, they consume most of the amino acids in their environment. The question is whether this code plays any role in the disease. And if cancer cells do use the differences between these codons to express some protein it needs to survive, can we exploit that to combat the disease?”