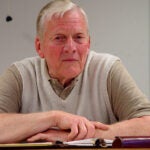 As a progressive female professor at Wellesley College in the 1980s, Peggy McIntosh refused to believe she could be contributing to the oppression of others. She recalls trying to come up with any instance in which she was benefiting from unearned privilege in her everyday life.

“In the middle of the night, up swam an example,” said McIntosh, now associate director of the Wellesley Centers for Women and a highly regarded anti-racism activist. “I flicked on the light and I wrote it down. In the next three months, 46 examples came to me,” everything from “I am never asked to speak for all the people of my racial group” to “I can choose blemish cover or bandages in ‘flesh’ color and have them more or less match my skin.”

That list became a groundbreaking article, “White Privilege: Unpacking the Invisible Knapsack,” that turned out to be the most important work of McIntosh’s career. Last Thursday (Dec. 13), McIntosh shared the story of her personal awakening to her privilege, and helped counsel the large crowd of Harvard faculty and staff through their own struggles with the difficult subject, in the second of this year’s diversity dialogues hosted by the Faculty of Arts and Sciences (FAS).

Conversations about privilege can be tricky. Examining one’s own advantages and disadvantages objectively can be just as difficult as raising the subject in the workplace. But acknowledging our own privilege — and using those advantages to help level the playing field for everyone — is essential in the fight against racism and sexism, McIntosh told the audience at the Radcliffe Gymnasium.

“Becoming an ally to those who are not very good at making it through the system is a great way of using what privilege you do have to help those who have less,” McIntosh said. “You can use the power you have to bring other people along, to lessen bureaucracy, to make others feel welcome and included, fully.”

As a younger woman, McIntosh said, she often wondered why male faculty at Wellesley — “very nice men” — were so dismissive of the idea of including women’s studies or women’s history in the college’s first-year curriculum. (“When you’re trying to lay the foundation stones for knowledge, you can’t put in soft stuff,” she recalled one man saying.)

“I thought I had to choose: Either these men were nice, as I knew they were, or they were oppressive,” she said. “But niceness has nothing to do with it.” It wasn’t that her colleagues were mean or overtly sexist, she said, but that they had been raised unquestioningly in a system that told them “that knowledge is male, that men are knowers,” and that women’s experiences weren’t appropriate for the college classroom.

If her male colleagues didn’t react well to being told they were out of touch, McIntosh didn’t fare much better when she first encountered her own white privilege.

“I realized I had been expecting thanks for working with people I had been taught to look down on,” she said of her interactions with her minority colleagues. “I thought that I was so nice that I would have disguised my racism. … But my assumption that my people should be in charge made me oppressive to work with.”

Acting on autopilot, she said, many of us may second-guess or mistrust our colleagues who are different from us, especially if we are part of a group — male or white, wealthy or heterosexual — that holds more cultural sway. But we can choose to ignore that cultural hardwiring and remind ourselves to listen to our colleagues who are different from us and to value their perspectives, she said.

“White privilege is like a bank account I was given,” McIntosh said. “I didn’t ask for it, but I can spend it down. And because it’s white privilege, it’ll keep refilling.”

As McIntosh led the audience through exercises and took questions from the crowd, it was clear that the topic resonated, in both practical and emotional terms, with many faculty and staff in attendance.

Alex Storer, a research technology consultant for the Institute of Quantitative Social Science who often trains faculty and staff on quantitative analysis software, wondered if the power imbalance already inherent in his client sessions was “exacerbated by the fact that my colleagues and I are all white men.” (McIntosh’s advice? Sit beside the person as you guide them through the learning process. “Become a human, not an expert.”)

After the talk, Storer said that being attuned to racial, gender, or cultural sensitivities is essential to doing his job well.

“I think to be as helpful as possible, which is the goal of our team, it’s important to meet people on a playing field that makes them feel comfortable and enables as much learning and productivity as possible,” he said.

“If you spend time with people who don’t think about their privilege very much, it can be really easy to forget how much privilege you have,” he continued. “It’s not something that’s on the tips of everyone’s tongues. … I think one of the values of coming to this sort of event is that you can really be reminded how much more work there is to do.”

The final diversity dialogue of the academic year, “Almost a Woman,” will feature author, screenwriter, and essayist Esmeralda Santiago and introductory remarks by Judith Singer, senior vice provost for Faculty Development and Diversity. The event will take place on April 3 from 10 a.m. to noon in the Radcliffe Gym, 10 Garden St. The workshop is free and open to all.