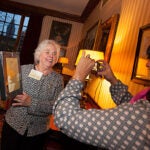 All have worked to help solve some of Africa’s problems

A Harvard senior and two recent alumnae — one the sister of a 2004 winner — have been named international Rhodes Scholars, and will join the six American Harvard students who will head to the University of Oxford next fall.

The award, one of the most prestigious in academia, each year recognizes 83 scholars for their scholastic achievement, personal integrity, leadership potential, and physical vigor. Created more than a century ago by the will of British philanthropist Cecil Rhodes, the scholarships cover all costs for two or three years of study at Oxford.

‘The power of educational opportunities’

For Naseemah Mohamed ’12, the award has personal and national historical resonance, a chance both to replicate the success of her sister Shazrene, a Harvard graduate and now an astrophysicist, and “to give back to my country” — Zimbabwe, part of the former Rhodesia — “and continent and ultimately combat the legacy of Cecil John Rhodes himself.” Rhodes helped to establish the African colony that bore his name.

“Winning the Rhodes for me is a testimony of the power of educational opportunities,” said Mohamed, whose scholarship application addressed colonialism’s legacy on Africa’s schools.

“I believe that the classroom is the crucible of a nation’s future, and that it should be a microcosm of co-operative social engagement,” Mohamed wrote in her essay. She said that after completing her studies toward a doctorate in education at Oxford, she intends to work with international institutions such as UNESCO “to create robust education systems in developing countries.”

The co-founder of the Center for African Cultural Excellence while at Harvard (where her work was recognized by winning the Harvard College Women’s Leadership Award, the Harvard Foundation Insignia Award, and the Michael C. Rockefeller Traveling Fellowship), Mohamed served as the president of the Harvard African Students Association. She also founded the Zilolonge Arts–Literacy Project, which pairs teachers and artists to aid arts-based learning at an impoverished school in Zimbabwe. She is currently working with a district officer from the Ministry of Education to expand the project.

Mohamed credited the inspiration of Professors Doris Sommer and Evelyn Higginbotham of Harvard’s African and African American Studies Social Engagement Program. “I could not have gotten this far alone,” she said. “I am grateful for their incredible dedication and support.”

Dalumuzi Mhlanga ’13 will use the scholarship to study toward a master’s degree in social anthropology. The founder of Lead Us Today, a nonprofit that provides leadership and entrepreneurial training to high school students in his native Zimbabwe, Mhlanga said his research will focus on the country’s informal economy and knowledge production process.

“I am interested in learning how people produce economic knowledge in the informal sector and what kind of knowledge they produce, with what effect,” said Mhlanga, who concentrates on social studies with a focus in civic engagement and democracy in Africa. “I hope to use this research to learn how best the education system can be transformed in ways that equip many of the young students who graduate from high school and engage in legal, informal economic activity.

“More broadly, I hope my work can add to the discourse on how the informal economy can be leveraged to bring about economic development in the Global South (developing countries).”

At Harvard, Mhlanga served as assistant director of the Leadership Institute and vice president of the Youth Alliance for Leadership and Development in Africa. He was also appointed student representative to the Faculty of Arts and Sciences (FAS) Committee on Public Service.

Madeleine Ballard ’11 is from Quebec and is currently working with Tiyatien Health to deliver maternal and child health care in a remote district of Liberia. She plans to pursue a master’s degree in evidence-based social intervention.

“I feel so incredibly fortunate to have been selected,” she said. “There is an awe-inspiring tradition of Rhodes scholars accomplishing great things that advance and enrich our world. To be counted among such leaders, moral exemplars, and thinkers is a great honor.”

Ballard’s interest in public health was fostered at Harvard, where she volunteered for the Harvard College Global Health and AIDS Coalition and the Harvard College Peer Health Exchange. Studying at Oxford, she said, will allow her to “put the fruits of academic study, on-the-ground experience, and deeply held convictions at the service of those who need them most.”

“I believe that health is a human right and that ‘the greatest wealth is health,’ ” she wrote in her Rhodes application. “My academic study and lived experience have only made my conviction to work in solidarity with underserved communities grow stronger.

“Regions like the one I work in in Liberia are plagued not only by lack of services, but by the prevailing notion that their people are too inaccessible, too difficult, and too expensive to treat. Only by pioneering and validating new possibilities in community health delivery can paradigms be changed and a new standard of dignified, accessible health care achieved.”