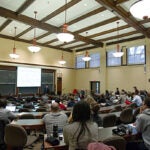 “To know them is to love them,” proclaimed the big-screen slide projected behind Aaron Ellison at the Harvard Museum of Natural History.  That’s not a description usually associated with ants.

A senior research fellow in ecology at Harvard Forest, Ellison was discussing his new book, “A Field Guide to the Ants of New England,” to an enthusiastic crowd that included members of the Harvard community and local fans of ecology.

Beginning Thursday’s lecture, he asked for a show of hands: How many in the audience had taken a magnifying glass to ants on the sidewalk when they were young? Nearly a third raised their hands — almost all men, he pointed out, joking that it was a non-gender-neutral question.

He flipped through his first few slides, of an ant farm from decades past, to an image of two human feet covered in ants. The air was sucked out of the room when the latter appeared, with the creepy-crawly horror it audibly invoked from the group.

He quickly moved on. “It took an anthill” said another slide, and Ellison acknowledged his co-authors, including the book’s chief photographer, Gary Alpert, research associate at Harvard’s Museum of Comparative Zoology, and recently retired from Harvard’s Environmental Health and Safety Department. The other co-authors are Nicholas J. Gotelli, professor of biology at the University of Vermont, and Elizabeth J. Farnsworth, senior research ecologist at the New England Wild Flower Society.

Ellison then delved into the importance of ants — and not just because, according to Alpert, Harvard happens to have the largest private collection of them in the world.

Ants, Ellison explained, turn over soil, bringing it up from as deep as two meters beneath the Earth’s surface. There are no earthworms native to New England, he said, or anywhere north of where the glaciers were. It is the ants that have spent the past 15,000 years making New England’s rich topsoil, one inch every 250 years.

Ants also clean up the forest for us. Insects such as caterpillars, moths, and beetles die all the time, but ants are one of the reasons “we are not face deep in insect carcasses when we walk through the forest.”

They also disperse about a third of the seeds of New England’s spring flowering woodland herbs.

New England has 132 kinds of ants. Ellison said that approximately 14 are “tropical tramps” non-native to New England, and that there are probably closer to 150 or 160 different species, with 11 hiding around the region’s borders.

The book is designed to be easy to follow, much like a field guide to birds. It has photographs of the ants in their natural habitats, and illustrations with guidance arrows showing where to look for identification, as well as maps. The book is the first of its kind.

He encouraged audience members to go into the field to collect ants themselves, and even to send samples in via the book’s website, to be added to the database. Ants are easy to collect, Ellison said. Using your fingers to pick them up, he said, place them in a vial with a little bit of alcohol so they die. (Tequila or gin works just fine if you “don’t have access to lab-grade ethanol.”) Record where you found them in a notebook, using GPS. You can even bring some cookies along, to eat yourself or as a sugary treat for the ants.

“They’re cool to look at,” said Ellison. “They’ve got hairs and different colors and cool heads.”

Indeed, the “Lady Gaga” ant, as he calls it (actually a Pyramica), has a big head and even a “skirt” that covers its behind.

“Ants are a chemical organism,” explained Alpert. “The same amount of information we get visually, they get chemically.”

And, they’re being watched closely these days, said Ellison, for their relationship with climate change.