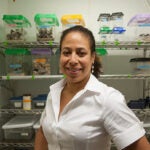 The bounty of EDEN

Harvard scientists have solved the long-standing mystery of how some insects form germ cells, the precursors to the eggs and sperm necessary for sexual reproduction. The answer is shedding light on the evolutionary origins of a gene that has been long viewed as critical to the process.

As described in a paper published Dec. 4 in Current Biology, a team of researchers led by Cassandra Extavour, associate professor of organismic and evolutionary biology, discovered that a cricket, a so-called lower insect, possesses a variation of a gene — called oskar — that has been shown to be critical to the production of germ cells in “higher” insects, particularly fruit flies. That discovery, Extavour said, suggests that the oskar gene emerged far earlier in insect evolution than researchers previously believed.

“The prevailing hypothesis was that, since only higher insects appeared to possess the oskar gene, that it must have emerged after the two branches of insect evolution diverged,” Extavour said. “We found that that can’t be right. Oskar is present in both groups of insects, so it must have emerged in their last common ancestor.”

Aside from rewriting science’s understanding of how germ lines evolved in insects, the finding is also shining fresh light on the importance of looking beyond the traditional models for biological research. Had her team not reached beyond the oft-used fruit fly model, Extavour said, its discovery of the evolutionary history of oskar likely would not have happened.

“There are some questions, especially deep evolutionary questions, you can never get at by examining only one animal,” said Extavour, who also serves as the director of the Evo-Devo-Eco Network (EDEN), an initiative funded by the National Science Foundation aimed at providing support to researchers who work outside the traditional model organisms. “And you certainly can’t get at them by examining animals that are very far removed from their last common ancestor, as the evidence shows fruit flies are.

“The whole concept of the model organism is based on the principle that what works in one organism works the same way, or a very similar way, in another organism,” Extavour said. “The more we know about biology, the more we understand that that’s not always the case.”

While their findings provide an answer to a riddle that had long stumped biologists, Extavour and her colleagues began their research by asking a simple question: Because germ cells are critical to the reproduction of so many plants and animals, could there be a single genetic pathway — one that evolution never tinkered with — to create them?

Scientists have long understood that higher insects such as fruit flies use a process called maternal inheritance, in which the mother loads material — including the oskar gene — into eggs before they are laid. That material, called germ plasm, later causes the cells containing it to become germ cells.

Among most lower insects, however, the process of forming germ cells is completely different, Extavour said, and understanding it provided hints that the oskar gene’s original role likely had nothing to do with germ cells.

While Extavour’s team found that lower insects like crickets do have a variation of the oskar gene, they were surprised to find that it appears to have little to do with forming germ cells. Unlike fruit flies, which cannot form germ cells without oskar, removing the gene from crickets has no effect on germ cell formation.

“What that means is that even though oskar emerged much earlier in evolution than we suspected, this role that we’ve been talking about for more than three decades — oskar has only been talked about in the context of being a germ line gene — this may not be the ancestral role it played,” Extavour said. “Somewhere along the line, it changed jobs.”

What was oskar’s original job, then, if it wasn’t to form germ cells?

When the researchers examined crickets, they found the gene not in germ cells but in neural stem cells called neuroblasts, suggesting that its original role was in the nervous system. Supporting this hypothesis was their observation that removing the gene from crickets caused defects in neuron production and nervous system wiring.

“Our argument is basically that in the last common ancestor of insects, the ancestral role for oskar was most likely in wiring the nervous system,” Extavour said. “Somewhere along the line, it got co-opted into this germ line pathway, and eventually rose to prominence in the hierarchy of genes that control germ cell formation.”