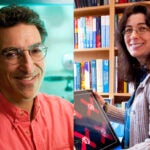 In the aftermath of Hurricane Sandy, how will our urban coastal areas deal with the challenge of rising sea levels? And how do we even begin to think about where to start?

On Dec. 3, Harvard Law School’s David Barron, J.D. ’94, the Honorable S. William Green Professor of Public Law, addressed some of these questions at a talk sponsored by the Environmental Law Society.

No one disputes that urban sea levels are rising, said Barron, who co-taught a class last semester on the urban responses to sea level rise. The challenge, he says, is in planning for frequent and intense flooding in places that don’t normally experience it. When people talk about solutions, they usually focus on planning or engineering, he said. But we also need to think about how the solutions will be implemented.

Barron discussed a range of ideas, each presenting its own challenges. The first approach he called “retreat” — forbidding development in newly designated flood zones and moving people out of the area. But who makes those decisions? The state or city? And how realistic is this approach in heavily populated areas, he asked, citing the example of post-Katrina New Orleans, where many people have stayed, and where there are no plans to relocate them.

He looked to Providence, R.I., for the example of another solution. The Fox Point Hurricane Barrier was built in the 1960s after two hurricanes flooded and seriously damaged Providence. But he pointed out that the hurricane barrier was completed before the implementation of environmental regulations, which now require stakeholder involvement and environmental impact assessments.

He also described “green solutions,” such as creating barrier islands and developing wetlands and oyster beds to absorb the impact of flooding and storm surges. But these options are expensive, he said, and there’s the question of how they would be paid for.

Finally, there is what Barron called “resilience planning,” which involves designing a city with flooding in mind. Preventive measures might include permeable streets, not using the first floors of buildings, and adapting public transportation. But who would make these decisions, he asked? The answers vary from place to place, he observed. For example, New York City has autonomy over its building codes, but Boston’s codes are subject to state approval.

These are not just challenges of planning, designing, or engineering, Barron said. They are political and governance problems. And there is an enormous vacuum in governance in addressing these issues, he added. “This is the thing that is least talked about or considered in the wake of Sandy,” said Barron. “Given what’s going on with the current budget negotiations, it’s hard to think of the United States right now existing in a moment in which large-scale planning can be successfully accomplished. But what something like urban sea level rise demands is large-scale planning, chiefly at a national level.”

Until then, Barron said, the absence of governance might at least mean there will be opportunities for law students and graduates to tackle these issues by working in local government, especially in new sustainability offices — and thus opportunities to influence how the federal government will rise to the challenge of rising urban sea levels.