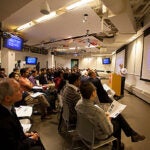 As the nights grow longer, the landscape turns gray, and the holidays approach, it seems natural that communities would gravitate toward lights, candles, and color.

But science and engineering? Yes: As dozens of local families will attest, those are at the heart of the holidays, too.

Celebrating its 11th year of public engagement, the Harvard School of Engineering and Applied Sciences’ (SEAS) Holiday Lecture Series dazzled and delighted audiences on Dec. 8 with a show guaranteed to kindle curiosity about the natural world.

“Each year, when we start advertising the lecture, people register immediately,” said Kathryn Hollar, director of educational programs at SEAS. “There are people who have been coming every year since the very beginning, and they tell us that this is the kick off to their holiday season. That’s very exciting to us. I hope that every time they look at a beautiful holiday display or light a candle, they’ll think about the science behind it.”

Equal parts professor and magician, Howard A. Stone, a former member of the Harvard faculty and now Dixon Professor in Mechanical and Aerospace Engineering at Princeton University, reprised his role as lecturer.

With Harvard’s demonstration expert Daniel Rosenberg as his mischievous sidekick, Stone led the audience through the many manifestations of light and color in physics, chemistry, and biology.

Pelting Stone with dozens of pingpong balls, Rosenberg introduced the concept of photons as particles that can bounce, then together the men shook a long spring to demonstrate waves that can reflect. (Ana Alvernaz, 7, was reminded of the games she plays with jump ropes at school.)

Each chemical element gives off a characteristic color spectrum as it burns, so Rosenberg held filaments of calcium, lithium, and copper in the flame of a Bunsen burner, producing flashes of orange, red, and green. A red neon lamp, a pink hydrogen lamp, and a yellow helium lamp added to the lesson.

For good measure, Rosenberg and Stone also electrified a large pickled cucumber. It glowed with the familiar, if somewhat eerie, hue of a sodium streetlamp.

To demonstrate the link between wavelength and color, everyone in the audience had been given diffraction-grating glasses, prismlike eyewear that split each light source into a rainbow of component colors.

Ten-year-old Riley Johnn Kadis of Newton was “quite taken” with the diffraction glasses, according to his grandmother, Marrey Embers. “He wore them almost throughout the whole lecture,” she said at the end, while Riley was up at the front of the hall, peppering Stone with questions.

“I think there’s a way in which science is almost like magic,” Embers said, “but here’s the man behind the screen who explains to you what’s actually going on.”

A resident of Roslindale, Embers traveled across town to meet up with her daughter and grandson — but admitted with a grin that she would have come with or without them.

“They love it,” she said. “There’s something very attractive about the whole ambience of being here, being reintroduced to some things but also having an opportunity for all three of us to learn together.”

“The goal is just to get kids and parents talking about science together,” said Hollar. “Even if they don’t ultimately choose science as a career, they should have some scientific knowledge and be able to think analytically. Science is a great way to teach clarity of thought.”

By introducing familiar concepts — neon signs, fall foliage reflected on a pond, tropical fish, and a camouflaged octopus— and then asking probing questions, Hollar and Stone wanted to encourage long-term curiosity about the everyday world.

“Hopefully they’ll see that the people who do this are ordinary people who get excited about what they do, and in some cases we’re as puzzled as the next person as to why the world works the way it does,” said Stone, who in 2000 was named a Harvard College Professor in honor of his outstanding service to undergraduate education. “We all just want to learn and understand.”

The Holiday Lecture is part of a range of educational outreach programs in science and engineering at Harvard that aim to engage K-12 students and members of the local community. This year’s event was sponsored by SEAS, the Harvard Center for Nanoscale Systems and the Materials Research Science and Engineering Center at Harvard (both supported by the National Science Foundation), and the research and outreach programs at Princeton.