Lessons for the next Sandy 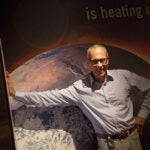 A notion to cool the skies

Rapid response should be followed by thoughtful rebuilding

Don’t just replace what was lost. Rebuild better, because another storm is coming.

That was the message from panelists at the Harvard School of Public Health (HSPH) on Monday who were discussing the devastation that giant storms can bring to coastal communities like those slammed by Hurricane Sandy earlier this fall.

The panelists agreed that the time after a storm, when federal disaster relief dollars flow, presents an opportunity to make changes to accommodate a world gradually being affected by climate change.

Coastal communities face a “trifecta” of water woes that need to be considered as they adapt to expected changes: sea level rise, storm surge, and increased precipitation, said Jerold Kayden, Williams Professor of Urban Planning and Design at the Harvard Graduate School of Design.

Kayden was a panelist on a webcast called “Big Weather and Coastal Cities: Resilience in the Face of Disaster.” The forum, sponsored by the HSPH, was presented in collaboration with the Huffington Post. It was moderated by Post senior writer Tom Zeller Jr. and also featured Richard Serino, deputy administrator of the Federal Emergency Management Authority (FEMA); Paul Biddinger, chief of Massachusetts General Hospital’s Division of Emergency Preparedness; and Daniel Schrag, director of the Harvard University Center for the Environment, Sturgis Hooper Professor of Geology, and professor of engineering and applied sciences.

Big Weather and Coastal Cities: Resilience in the Face of Disaster

Video of the panel discussion from The Forum at HSPH.

The time after a disaster offers an opportunity to make positive changes, panelists agreed. Not only is rebuilding required and federal disaster relief available, but officials have the public’s attention — and approval  — to propose changes in building codes and land use patterns.

Even with that receptiveness, the panelists agreed that some changes will always be difficult to get through. Compassion for storm victims, compounded by general respect for private property rights, can short-circuit a more clear-eyed assessment of whether a home should be rebuilt. Political considerations also often trump scientific ones, leading to a continuation of policies that have homes crowding vulnerable coastlines even as a warming climate promises rising seas and stronger storms.

“We rebuild, but we don’t necessarily rebuild better,” Schrag said.

Drawing on the lesson of 2005’s Hurricane Katrina in New Orleans, Biddinger said, one New York hospital built 12-foot-high storm walls around basement generators. But they didn’t help when Sandy rolled ashore, because there was a 14-foot storm surge, which flooded the basement and knocked out power.

Although computer models provide some guidance as to what may be coming in the future, Schrag cautioned against putting too much stock in them, pointing out that the climate changes that humankind is causing on the Earth haven’t been seen for millions of years.

In a storm’s immediate aftermath, a lot of attention focuses on the government, even though FEMA’s job is to play a coordinating role for other responders, Serino said. The most important preparations take place in the weeks and months before a storm, when emergency plans and procedures are drafted and equipment is stockpiled. In New York, for example, officials wisely decided to shut down the subway system before the storm struck, limiting damage and allowing a faster restoration of service.

Serino also praised the response of religious groups, whose existing networks often can reach those vulnerable after a disaster faster and more efficiently than government responders can. It’s critical, Serino said, for government to recognize and use existing community networks to get relief to people quickly. The most crucial response of all, though, may be that of individuals, reaching out to each other.

“We saw neighbors helping neighbors, saving lives all up and down the coast,” Serino said.

Hurricane Sandy has fostered a conversation on climate change and adaptation unlike previous large storms, Schrag said. New York City Mayor Michael Bloomberg helped with that focus, in part through his endorsement of President Barack Obama for re-election because of Obama’s concern over climate change.

Sandy was an atypical storm, Schrag said. It strengthened as it moved north over unusually warm water, and it moved west to make landfall whereas most storms move east, pushed by prevailing winds. Some scientists have hypothesized that the unusual pattern may be related to shrinking Arctic sea ice, Schrag said. If that hypothesis is right, it could mean more storms will be steered to the Northeast, which would be bad news for coastal communities in the region.

Although responsiveness to coastal vulnerability has been slow to grow, panelists said that some states and communities are learning the lessons of Katrina and other storms. Serino said that zoning regulations across Florida, for example, have improved because of that state’s frequent hurricanes.

For better or for worse, governments and the public probably will have time to build in proper safeguards, Schrag said. Climate change will likely take decades to transform the globe thoroughly.