Extra chemo could be answer 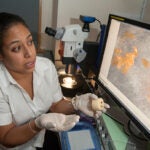 Young patients with an aggressive form of leukemia who are likely to relapse after chemotherapy treatment can significantly reduce those odds by receiving additional courses of chemotherapy, suggest the findings of a clinical trial led by investigators at Harvard-affiliated Dana-Farber/Children’s Hospital Cancer Center in Boston.

The trial leaders today presented the results of the Dana-Farber Cancer Institute Acute Lymphoblastic Leukemia (ALL) Consortium study, which involved nearly 500 patients under age 18 with B-precursor acute lymphoblastic leukemia (B-ALL), at the annual meeting of the American Society of Hematology (ASH).

Trial participants received an initial course of induction chemotherapy for B-ALL, a cancer of the blood that is one of the most common cancers in children younger than 15. After a month of treatment, the patients’ bone marrow samples were sent for a test able to measure levels of leukemia that cannot be seen under a microscope. Thirty-five of the patients were deemed to have a very high risk of relapsing because they retained relatively large numbers of leukemia cells as measured by this test. An additional 16 patients were also considered very high-risk because their leukemia cells had certain chromosomal abnormalities.

These 51 patients then received an intensified treatment regimen consisting of two additional rounds of chemotherapy using agents not typically given to newly diagnosed patients with B-ALL. This was followed by an intensified consolidation phase of therapy to keep the disease in remission, then a standard maintenance phase to further deter the disease from returning.

Investigators estimate that five years after reaching complete remission, the rate of event-free survival (a measure of survival without relapse or development of another cancer) was 76 percent for these very high-risk patients. By contrast, less than half of similar patients who receive standard chemotherapy reach the five-year mark without relapsing.

“Pediatric patients with B-ALL traditionally receive a standard course of chemotherapy if their risk of relapse is low, and a slightly intensified course if their risk is higher,” says the study’s lead author, Lynda M. Vrooman of Dana-Farber/Children’s Hospital Cancer Center and Harvard Medical School (HMS). “In this study, we identified a new risk group — those with a very high risk of relapse — and studied the effect of a novel, even more intensive chemotherapy regimen on their outcome.”

“Though it involved a relatively small number of patients, the new trial is one of the first to show improved outcomes for this set of patients as a result of an intensified chemotherapy protocol,” says HMS Associate Professor of Pediatrics Lewis Silverman of Dana-Farber/Children’s Hospital Cancer Center, the senior author. Trial leaders will continue to track the study participants to gauge the durability of the remissions produced by the intensified treatment.