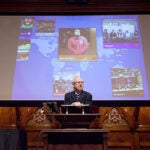 A class open to the world

Brighton resident Carol Woo may have been on crutches with her leg in a cast, but she still braved the rain to attend Professor Robin Kelsey’s talk on photography. The event was part of the Harvard Allston Ed Portal’s faculty speaker series, which brings Harvard professors to the Ed Portal to present on subjects from the General Education curriculum.

“I like to come to the lectures, and I’m particularly interested in photography,” she said. “When I was young, I took pictures all the time and even entered them in competitions, and thought this was a great opportunity to learn more about the subject.”

Kelsey, the Shirley Carter Burden Professor of Photography and chair of the History of Art and Architecture Department, focused on “performing for the camera” — from the stiff, formal poses adopted for daguerreotype images to the anonymity of candid shots taken with cellphones. The lecture—this fall’s second—drew an audience of about 50. It was followed by a Q-and-A session.

“I was quite impressed not only by the number of people in tonight’s audience, but by their engagement as well,” Kelsey said. “They had tremendous curiosity and great questions. That’s one of the interesting things about general audiences — they often bring a wealth of experience to the event, both because they have years of life experience, and because they often have so much real practice and expertise in the field.”

Robert Lue, faculty director for the Ed Portal and HarvardX, and a professor of molecular and cellular biology, said such passion from both speakers and audiences is common during the lectures.

“A change of audience, for anyone who lectures or speaks, results in a different take on your own material,” Lue said. “It’s very stimulating. It’s not just about Harvard giving to the community; it’s an exchange, a mutually reinforcing and enriching relationship. For the Harvard, Allston, and Brighton communities to come together allows all members to share their passions, hopes, and aspirations. It’s that human-to-human interaction that makes and builds the threads between Harvard and Allston, and building that bridge is very important.”

In addition to the speaker series, the Ed Portal, which opened in 2008, offers programs in mentoring and workforce collaboration, and often hosts special events. Each semester, Harvard undergraduates mentor more than 100 local kids in subjects such as science, math, and writing. This fall the Ed Portal expanded with the opening of the Ed Portal Annex, and new arts, cultural, and recreational programs for community members of all ages.

For Woo, the Ed Portal has served as a resource for herself and her two children, 11 and 14.

“I’m always looking for special programs for my kids, and the Ed Portal has opportunities for them to learn more about so many subjects,” she said. “I just feel that it’s a wonderful program, for them and for me. It’s a great resource for a lot of parents, families, and people in the community.”