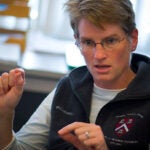 Patricia A. King, the Carmack Waterhouse Professor of Law, Medicine, Ethics, and Public Policy at Georgetown Law Center, plans to step down from the Harvard Corporation at the end of December, the University announced today.

A 1969 alumna of Harvard Law School who has served on the Georgetown faculty for nearly four decades, King is a noted expert in legal and ethical aspects of biomedical science, with broad experience at the intersection of scholarship and public policy.

“It’s been a great privilege to serve on the Corporation these past seven years and to work with valued colleagues in helping to guide a university that means so much to the world,” said King. “They have been eventful years, including a leadership transition, a worldwide financial crisis, the rise of globalization and new technologies, and a rapidly changing landscape for all of higher education.  I’m especially pleased to have played a part in the governance reforms that we adopted in 2010 and that I believe will strengthen the Corporation and the University for decades to come. While I regret having to bring my service to a close for family reasons, I will look back on these years with a sense of deep appreciation, and with admiration for the people who make Harvard so extraordinary.”

“Pat King has been a remarkably thoughtful and incisive Corporation colleague, always focused on the institution’s best interests and how it can challenge itself to do better,” said Robert D. Reischauer, the Corporation’s senior fellow and president emeritus of the Urban Institute.  “We will all miss working with her, and Harvard will miss her wisdom.”

“I have admired Pat King since I first met her, and I’m very grateful for all she has done to support me personally and to help Harvard advance institutionally,” said President Drew Faust. “She has a clear moral compass, a penetrating view of what matters most to Harvard and higher education, and a wonderfully probing, firm, and yet gracious and generous way about her that has contributed invaluably to the Corporation’s work.”

King joined the Georgetown law faculty in 1974, and has also served since 1990 as an adjunct professor in the Department of Health Policy and Management of the Bloomberg School of Public Health at Johns Hopkins University. Her scholarship and teaching range across law, medicine, ethics, and public policy. Her publications address such topics as race and bioethics, ethical and policy dimensions of stem cell research, and the ethics of experimentation involving human subjects.

A longtime trustee of her undergraduate alma mater, Wheaton College (Mass.), King chaired the Wheaton board from 2000 to 2005. Over the years, she also served as vice chair of the Henry J. Kaiser Family Foundation, vice chair of the Russell Sage Foundation, a member of the Council of the Institute of Medicine, and a member of the advisory committee to the director of the National Institutes of Health.

Early in her career, King was a lawyer in the federal government, serving as special assistant to the chair of the Equal Employment Opportunity Commission, deputy director of the Office of Civil Rights of the Department of Health, Education, and Welfare (HEW), and deputy assistant attorney general in the Civil Division of the Department of Justice.

King is a member of the American Law Institute and the Institute of Medicine and a fellow of the Hastings Center. Her work in bioethics has included service on the HEW’s Recombinant DNA Advisory Committee, the President’s Commission for the Study of Ethical Problems in Medicine and Biomedical and Behavioral Research, the National Commission for the Protection of Human Subjects of Biomedical and Behavioral Research, and the Ethics, Legal, and Social Issues Working Group of the Human Genome Project

The Harvard Corporation, formally known as the President and Fellows of Harvard College, is Harvard’s principal fiduciary governing board and the smaller of Harvard’s two boards, the other being the Board of Overseers.

Nominations and advice regarding future Corporation appointments may be sent, in confidence, to corporationsearch@harvard.edu.