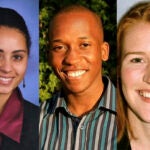 Charles H.W. “Henry” Foster, a 20-year associate of the Harvard Forest, a Harvard College alumnus, and for decades one of the nation’s leading environmental policy experts, died of cancer on Oct. 4 at the age of 85 in Needham, Mass.

After graduating from Harvard College, Foster earned professional degrees in forestry and wildlife management from the University of Michigan, and a Ph.D. in geography and environmental engineering from Johns Hopkins University. From 1945 to 1947, he served in the U.S. Army. He was the former dean of the Yale School of Forestry & Environmental Studies.

He devoted more than 15 years of his career to government, serving seven Massachusetts governors in such posts as water resources specialist, commissioner of natural resources, and, in 1971, as Massachusetts’ first cabinet-level secretary of environmental affairs. In 1986 he began a long association as a research fellow with the Belfer Center for Science and International Affairs at Harvard University’s John F. Kennedy School of Government.

Foster served as president of The Nature Conservancy from 1966 to 1967 and as professor of environmental policy at the University of Massachusetts, Amherst. He also taught at Brown, Clark, Stanford, and Tufts universities. He has published widely on natural resources and conservation.

In 1970, Foster led the establishment of the forward-thinking New England Natural Resources Center (NENRC), which sought to build bridges between business, government, and the burgeoning public environmental movement. In the decades that followed, NENRC laid the foundation for many conservation innovations in New England, including the Wildlands and Woodlands effort out of the Harvard Forest.

In 2011 the New England Governors’ Conference passed a resolution honoring Foster for his academic and public service, and for his contributions to professional and nongovernmental organizations, such as the Woods Hole Oceanographic Institution, the New England Aquarium, the Conservation Foundation, the Appalachian National Scenic Trail Advisory Board, and the Cape Cod National Seashore Advisory Commission.

“I had the opportunity to work with Hank Foster for 40 years. No individual has had a greater impact on how New England governs the use of its woodlands, its streams, its lakes, and its coastline,” said Henry Lee, Jassim M. Jaidah Family Director of the Environment at Harvard Kennedy School. “He was the true embodiment of a statesman in his ceaseless and selfless efforts to improve the environment in which we live. He was a role model for hundreds of his protégés and students, whose careers have been shaped by his wisdom and his leadership.”

“Henry Foster was an extraordinary man and friend. He was focused on regional issues and policy solutions to major environmental problems confronting humanity, and he shared his expertise willingly to students and colleagues and inspired and amazed us all with his experience, energy, and insights,” said David Foster, director of Harvard Forest.

He was a member of many national and international boards and commissions, and in 2007 received the Allen Morgan Award for Lifetime Achievement from the Massachusetts Audubon Society, a Golden Membership Award from the Society of American Foresters (2006), and a Conservation Service Award from the U.S. Department of the Interior (2002). Owing to the range and longevity of his work, Foster is the only two-time recipient of the Charles Bullard Fellowship at Harvard University.

Foster is survived by his wife of 59 years, the former Barbara Duchaine of Needham; a son, Jonathan, of Los Angeles; two daughters, Susan ’83, of Woodbridge, Conn., and Frances, of St. Louis, Mo.; and six grandchildren.