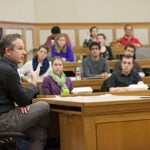 Study finds differences in how they participate an important factor

A new study finds differences in the ways that participation in Alcoholics Anonymous (AA) helps men and women maintain sobriety. Two Massachusetts General Hospital (MGH) investigators found that while many factors were helpful to all AA participants, some had stronger effects in men and some in women.

For example, avoidance of companions who encourage drinking and social situations in which drinking is common had more powerful benefits for men, while increased confidence in the ability to avoid drinking while feeling sad, depressed, or anxious appeared to be more important for women. The report will appear in Drug and Alcohol Dependence and has been released online.

“Men and women benefit equally from participation in AA, but some of the ways in which they benefit differ in nature and in magnitude,” said John F. Kelly, Harvard Medical School (HMS) associate professor of psychology and the associate director of the MGH-Harvard Center for Addiction Medicine. “These differences may reflect differing recovery challenges related to gender-based social roles and the contexts in which drinking is likely to occur.”

Kelly and his co-author, Assistant Professor of Psychology Bettina B. Hoeppner, note that, while AA was founded by men, one-third of its members today are women.  Studies have found that women benefit at least as much as men from participation, and many women become deeply involved in the AA program. The researchers carried out some of the first studies identifying the behavioral changes behind the success of AA participation, and this report is the first to examine whether the benefits differ between men and women.

Kelly and Hoeppner analyzed data from more than 1,700 participants, 24 percent of whom were women, enrolled in a federally funded trial called Project MATCH, which compared three approaches to alcohol addiction treatment. Participants in the trial were free to attend AA meetings along with the specific treatment program to which they were assigned.  At several follow-up sessions, participants reported their success in maintaining sobriety, whether or not they were attending AA meetings, and completed specialized assessments of factors such as their confidence in their ability to stay sober in particular situations and whether their social contacts supported or discouraged their efforts to maintain abstinence.

In September 2011, Kelly, Hoeppner, and colleagues reported in the journal Addiction that increased confidence in the ability to maintain abstinence in social situations and increased time spent with people who supported abstinence were the behavioral changes most strongly associated with successful recovery among Project MATCH participants attending AA meetings.  The current study reanalyzed some of the data used in the Addiction study to see if there were differences between men and women in the impact of factors included in the assessments.

For both men and women, participation in AA increased confidence in the ability to cope with high-risk drinking situations and increased the number of social contacts who supported recovery efforts. But the effect of both of those changes on the ability to abstain from alcohol was about twice as strong for men as for women. In contrast, women benefited much more than men from improved confidence in their ability to abstain during times when they were sad or depressed. “It is striking that this effect was virtually absent in men while it was a major contributor to women’s ability to remain abstinent and to limit the number of drinks they consumed when they did drink,” says Hoeppner. Several factors that helped to reduce the intensity of drinking in men — such as less depression and fewer friends who encouraged drinking — did not appear to be as important for helping women.

Kelly says, “AA helps both men and women stay sober following treatment by enhancing sober social networks and boosting confidence in coping with high-risk social situations. In terms of alcoholism recovery more generally, we found the ability to handle negative moods and emotions was important for women but not for men. Conversely, coping with high-risk social situations — which could be attending sports or other events where people are likely to drink — was important for men but not women.  These differences suggests that, for women, finding alternative ways to cope with negative emotions may yield recovery benefits, while among men, a greater focus on coping with social occasions that feature drinking may enhance recovery.

“In terms of drinking intensity — the number of drinks consumed on days when someone does drink — because the variables we studied explained only about half of the effects of AA for women, there must be other factors involved that were not captured in our analysis,” he adds.  “More work is required to fully capture the biopsychosocial effects of AA participation for enhancing alcohol addiction recovery, particularly among women.”