A week in the life of Leverett House 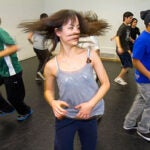 Established in 1930, Leverett House is the largest residential House at Harvard. Leverett’s social calendar was overflowing in mid-December with a series of events that included a Master’s open house, a student-faculty reception and dinner, and a talent show. Hosted by Masters Howard and Ann Georgi, the open house featured the famed Leverett monkey bread (cinnamon-flavored bread chunks baked to a warm golden-brown hue), the making of foil snowflakes, gingerbread decorating, and impromptu caroling around the piano.

The student-faculty dinner, held once each semester, is a chance for students to get one-on-one time with a teacher of their choice. It was a party atmosphere, with “Chief “ Georgi setting the light-hearted tone, as elbow-to-elbow guests engaged in excited conversation. Lurking under the tables, waiting for tasty morsels to fall, were the two canines-in-residence, a Welsh corgi named Bandit, and Rosie, a gentle Australian shepherd. They didn’t wait in vain.

The annual talent show wrapped up the busy week, featuring a number of moving performances. The acts consisted of several folksingers, a poet reading her work in two languages, a stand-up comic, and two piano players. To make the evening sweeter, a table of desserts offered enticements of apple and pumpkin pies, oatmeal raisin cookies, brownies, German chocolate cake, biscotti, orange chiffon cake, and, oh, yes, a healthy but not-so-tempting bowl of fruit.