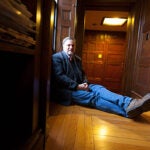 The ongoing allure of Tolkien

In the extraordinary life of David Foster Wallace, his time at Harvard was, fittingly, a footnote.

Wallace — the author, most famously, of “Infinite Jest,” a novel so full-to-overflowing with ideas it required almost 100 pages of endnotes — came to Harvard in 1989, at the age of 27, intending to earn a Ph.D. in philosophy. He lasted half a semester before turning himself over to University Health Services, whose doctors promptly sent him to McLean Hospital for inpatient treatment of depression and alcoholism.

Monday at Emerson Hall, the very building where a stressed-out Wallace was once found asleep under his desk in the philosophy graduate students’ office, D.T. Max ’84 discussed the research behind his new study of the writer, “Every Love Story Is a Ghost Story.”

Max’s biography — the first of Wallace, who committed suicide in 2008 at 46 — is “a remarkable book that puts a vast supply of facts on a tight and disciplined budget,” said James Wood, professor of the practice of literary criticism. “It reads less like a formal biography than a long, curious conversation with its subject.”

Max and Wood sat down for their own conversation, co-sponsored by the Mahindra Humanities Center and the Harvard Advocate, to discuss Wallace’s time in Boston, his long struggle with mental illness, and how both animated his body of work, which spanned fiction and nonfiction and tackled everything from the purposes of boredom and irony to the ethics of eating lobster.

Wallace, a brilliant student who had already published a novel, “The Broom of the System,” by his mid-20s, was one of just six students admitted to the philosophy program from hundreds of applicants. But he was quickly overwhelmed by the workload and the culture at Harvard.

If Wallace’s brief time at Harvard was a failure, his decision to come to Cambridge proved serendipitous for his writing.

“The breakdown launched Wallace onto the path that would lead to his most important work,” said Steven Biel, executive director of the Mahindra Center and senior lecturer on history and literature, who introduced the evening’s conversation and readings of both Wallace’s and Max’s work.

After his stint in McLean, Wallace landed at Granada House, a halfway house in Brighton. (Never to return to Harvard as a student, “He was too humiliated to go back to get the vegetable juicer, a gift from his mother, that he had left behind in the graduate office,” Max writes.) There he met a cast of crooked characters who would inspire much of “Infinite Jest,” most notably Big Craig, a house supervisor on whom Wallace based one of his protagonists, Don Gately.

Wallace’s time at Granada House gave him not only material, but also the tools to manage his addictions and his crippling anxiety (prone to fits of sweating, he wore his now-infamous bandana not as an “homage to Kurt Cobain,” Max said, but to hide his perspiration). After he left Boston for Syracuse in 1992, Wallace went on to produce his best work, including “Jest” in 1996 and lauded essays like “Consider the Lobster.”

“David fits a wonderful paradigm, which is a paradigm which makes us all sleep well in our beds: crazy early experimentation, moves toward eternal verities later in life, recognizes the role of God and family, ends up baking apple pie,” Max said. “And then there’s this inconvenient ending that we all don’t know what to do with.”

Max first wrote about Wallace in 2009 for The New Yorker, detailing Wallace’s struggle to finish his final project, “The Pale King,” an ambitious work on the transcendent power of boredom that explored the lives of fictional IRS employees in Peoria, Ill. (It was published last year in its partially completed form.) As he worked on the biography, Max said, “My belief that David effectively committed suicide because he couldn’t finish the novel actually got stronger.”

“He’s at the height of his powers,” Max said of Wallace’s last years, when he was living in California, teaching at Pomona College, and happily married to the artist Karen Green. “You look at these manuscripts and you see enormous concentration, enormous gifts, enormous intensity, and a guy who’s got a lot of time to grapple with what he wants to do, and he can’t do it.”

After reading Wallace’s letters, Max concluded that Wallace stopped taking the antidepressant Nardil in the hopes that it would clear up his mind to finish “The Pale King.” His excuse that he was suffering physical ailments from the drug, which he had been taking successfully for years, was “the blather he laid out” for doctors, Max said.

“He never developed the craft that some writers rely on, the sense of himself as a craftsman that takes some writers into middle age and beyond,” Max said. “He was all inspiration.” (As Wallace once told his Harvard roommate, “If I feel my ass in the chair I’m not writing well.”)

“If you’re going to be that writer, I think it’s very hard to mix that with a happy personal life, and the more ordinary emotions of the middle years of a person’s life,” Max said.