A notion to cool the skies 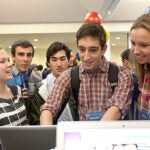 For a day, geek is chic

If they wanted to, nations around the world could release globe-cooling aerosols into the atmosphere or undertake other approaches to battle climate change, an authority on environmental law said Monday. He recommended international discussions on a regulatory scheme to govern such geoengineering approaches.

Under international law, nations can research and deploy such approaches on their own territory, on that of consenting nations, and on the high seas, said Edward Parson, a law professor at the University of California, Los Angeles. Despite that freedom, research into climate engineering remains stalled while opposition from environmental groups, fearful of unintended consequences, is growing,

Parson gave an overview on the policy challenges of climate engineering during a talk titled “International Governance of Climate Engineering” at the Science Center Monday evening. The session was part of a new series co-sponsored by the Harvard University Center for the Environment and the MIT Joint Program on the Science and Policy of Global Change.

Although several geoengineering approaches are feasible, Parson focused on one he said could be deployed most rapidly: spraying cooling aerosols high into the atmosphere. Nature has already proven such an approach to be effective. When volcanoes erupt, they spew sulfur compounds that reflect the sun’s radiation. Large eruptions can result in global-cooling events, volcanic winters lasting up to several years.

The approach would be fast and cheap but imperfect, Parson said. Aerosols could be sprayed from airplanes relatively inexpensively, for billions of dollars, with costs dropping. It would be an imperfect approach, Parson said, because although spraying aerosols would cool the Earth, it would not be a permanent fix. The effort would do nothing to stop the driving forces of warming: the emission of greenhouse gases. Also, the tactic would last only a year or two, and it wouldn’t address climate change’s other effects, such as acidification of the oceans and ecological changes.

Still, Parson said, the effort could mitigate climate effects that are rapidly worsening, or, more strategically, it could “shave the peak” from the worst warming while the world transitions to low-carbon energy, or it could be employed on a regional scale to mitigate localized problems, such as limiting the melting of sea ice during the Arctic summer or reducing sea surface warming in the regions where hurricanes form.

Of course, the prospect of such offbeat approaches also raises the specter of incompetent, negligent, or even malicious uses, Parson said. One of the largest potential threats involving climate engineering could come from nations’ militaries looking to ease domestic conditions at a neighbor’s expense.

International regulations could be drafted by the dozen or two dozen nations capable of carrying out such programs, Parson said. He suggested that such regulations should ban research that might have large-scale impact while allowing more responsible, smaller-scale work to proceed. He also advocated requirements for transparency and disclosure of results.

Parson said it is important to find out whether climate-engineering techniques can have a regional or global impact, and how much they might be fine-tuned to address local or regional problems. It also will be important to determine where nations’ interests lie. If their goals are aligned, he said, creating and executing a regulatory scheme will be far easier to do.

Though it may be difficult to get intransigent nations to the table, as their fear over climate change rises, so will their willingness to negotiate, he suggested.

“Nothing is politically impossible, contingent on the current level of alarm,” Parson said.