A class open to the world 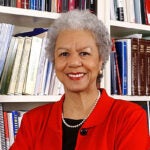 Tapping into the Internet and using several iPads as video cameras, Sandel, the Anne T. and Robert M. Bass Professor of Government, connected his Harvard students in Sanders Theatre on Friday with students in Japan, China, Brazil, and India for a wide-ranging discussion that explored the complicated question of the ethics of solidarity and the dilemmas associated with patriotism, membership, and collective responsibility.

It was the third time that students in Sandel’s class have interacted with students from around the globe, and the numbers suggest the innovative experiment is paying off. Hundreds of undergraduates made their way to Sanders for the extra morning session — the class typically only meets on Mondays and Wednesdays — for a chance to hear what their international peers thought about challenging moral questions.

“Ethical reasoning and moral argument change their character in rich and subtle ways when the range of participants is enlarged,” said Sandel, who developed his global classroom with the help of a technology called Spin, the product of the San Francisco-based startup Net Power & Light.

“I think one of the first lessons the students have learned from this experiment is that there are as many disagreements within the countries as between them, and the dividing lines on competing moral principles and competing theories of justice do not correspond neatly to national boundaries.”

Using his trademark style of posing a universal moral question to engage students in discussions with one other, Sandel jump-started the session by wondering aloud: “Do we owe special obligations to those with whom we share a history, to those with whom our own life story is somehow connected?”

He then framed his question with a more concrete scenario, asking students listening at Harvard and at universities in Tokyo, Shanghai, São Paulo, and New Delhi whether they thought it acceptable to root for the home team during the Olympics. While most students thought that was perfectly normal, a few, including a young woman from New Delhi, weren’t so sure.

“If you are only rooting for somebody, you are obviously at the same time rooting against somebody else, and I think we should believe in a common humanity,” she suggested.

Sandel then took the question one step further. “Let’s sharpen the issue by introducing a competing moral claim,” he said. If you were the member of an Olympic team and found a teammate had used a performance-enhancing drug, would you turn that person in, while risking the team’s chances of winning a gold medal?

A quick survey of raised hands showed that most students would overlook their obligation to country and report the offender. The purpose of the Olympics is to compete, but cheating in a competition built on fairness “undermines the whole point,” said one Harvard student.

Still, another student from New Delhi argued that his responsibility to the team and his nation was paramount. “He is part of my team, and he is representing my country, and the bond that we have would supersede the fact that he’s cheated,” the student said.

Later, Sandel challenged the class to examine a similar dilemma, one with even broader impact.

“Is it possible,” he mused, “for this generation to be morally responsible for righting the wrongs of previous generations?” He offered as context the question of whether present-day Germans should address the injustice of the Holocaust, whether the Australian government should issue an apology for the harsh treatment of aboriginal people, or if the United States government should pay reparations to the descendants of slaves.

A young woman in São Paulo challenged the notion that such responsibility should extend across generations. “When is it going to end?” she said. A young man from Tokyo, who, along with his classmates had stayed up into the early hours of Saturday for the discussion, argued that he was not responsible for the choices of others. “We did not have any power to influence their decisions.”

But a Harvard undergraduate countered that argument based on her theory of a type of implicit consent. Freshman Keyanna Wigglesworth contended that if today’s generation “benefits from the wrongdoings” of past generations, “then they are responsible.”

After the class, Wigglesworth said engaging with students from around the world helps to enhance the debate and highlight not only the differences but also the similarities among students. Recapping the day’s final discussion, Wigglesworth called the issue of addressing past injustices a global problem.

“It’s not just a problem that we have here in America, with Japanese internment camps or the institution of slavery,” she said, adding that Sandel’s virtual classroom “brings a lot of new ideas and new perspectives to me about what people in other countries are thinking.”

It’s not the first time that Sandel has offered an interactive class to a wider audience. In 2009, he created a television series based on his class in collaboration with Boston’s public television station WGBH. Last year, he developed a video-linked global classroom with students from Harvard, Shanghai, and Tokyo, which was broadcast on Japan’s NHK television. Sandel’s class is an Internet sensation, with more than 12 million views on Harvard’s iTunes U and YouTube channels.

The idea to develop a global classroom took shape following the overwhelming response to making “Justice” available online. The next step, said Sandel, was to “engage with students who were following the course from around the world so that it could be a mutual learning experience.”

New technology, Sandel added, “takes the distance out of distance learning. Now we are able to invite the world in, actually invite them into the Harvard classroom, into Sanders Theatre. … It makes technology an instrument of mutual learning.”

Harvard freshman Matt Sanders said he was happy to spend part of his day in the extra class to hear from fellow students in four time zones.

“It’s just exciting to have a new perspective in the room … you can go to all these different places. We can hear how [students] feel, and whether they agree with us, or whether it’s completely different. It’s really cool.”