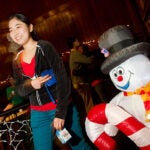 A total of 895 students were admitted today to Harvard’s Class of 2017 under the Early Action program. This number represents an increase of 16 percent over last year, when 774 were admitted early.

The number of Early Action applicants this year rose 14.7 percent from last year. “An increasing number of the nation’s and the world’s best students chose to apply early to Harvard this fall, the second year of our restored Early Action program,” said William R. Fitzsimmons, dean of admissions and financial aid. “It appears now that early may not be early at all but the ‘new normal’ for some students who feel ready to apply by Nov. 1.”

Harvard reinstated Early Action after a four-year absence. In each of the four years before the hiatus, between 813 and 902 students were admitted from applicant pools that ranged from 3,869 to 4,214.

“Given the large numbers applying to Harvard in recent years, over 34,000, the admissions committee was careful to admit only those who were certain to be admitted later,” said Fitzsimmons.  “Last year, slightly more than 100 students who were deferred in Early Action were admitted in the spring.”

It is too early to determine precisely the socioeconomic composition of the admitted group because many students have not yet submitted financial information.

“Nevertheless, we are encouraged by preliminary data,” said Sarah C. Donahue, director of financial aid. “Requests for fee waivers rose, along with a substantial increase in staff estimates of students’ eligibility for the Harvard Financial Aid Initiative’s low- and moderate-income program,” she said. “The unwavering commitment of Michael D. Smith, dean of the Faculty of Arts and Sciences, Evelynn M. Hammonds, dean of Harvard College, and Drew G. Faust, president of Harvard University, to our revolutionary financial aid program in these uncertain economic times continues to send a clear message that talented students from all socioeconomic backgrounds are welcome at Harvard.”

Families with annual incomes of $65,000 or less and normal assets are no longer required to contribute to their children’s educational expenses. Those with incomes from $65,000 to $150,000 pay on a sliding scale up to 10 percent of annual income, and there is also need-based aid available to families with incomes greater than $150,000. Home equity is not considered in the calculations, and students are no longer required to take out loans.

More than 60 percent of Harvard students receive need-based financial aid, including grants averaging more than $40,000. As always, students are expected to contribute to the cost of their education by working during the school year and in summer. Students and families also have access to Harvard’s new Net Price Calculator a simple one-page worksheet available on the Admissions and Financial Aid website that can estimate a family’s eligibility under Harvard’s need-based financial aid program.

“We continue to make progress in attracting outstanding minority students in our early program,” said Marlyn E. McGrath, director of admissions. “The number of admitted Asian-Americans increased from 170 to 194, African-Americans from 74 to 78, and Native Americans from nine to 14, while the number of Hispanic-Americans declined slightly from 76 to 70, and Native Hawaiian from four to two,” she said.

“There were also several changes in students’ intended concentrations,” continued McGrath. “While the numbers interested in the social sciences and the biological sciences increased only slightly, 179 listed the humanities, compared with 132 last year. The School of Engineering and Applied Sciences continues to attract more students. The number interested in engineering rose from 74 to 89, physical sciences from 64 to 82, mathematics from 52 to 64, and computer science from 14 to 22.”

“Admitted students will receive a great deal of information over the months ahead to help them with their college choice,” said McGrath. Faculty, staff, undergraduate recruiters, and alumni will use phone calls, emails, and regular mailings to reach out to admitted students with information about Harvard. Many Harvard clubs will host local parties during the winter holidays and in April. All admitted students will be invited to Cambridge on April 20-22 for Visitas, a comprehensive program that enables students to experience life at Harvard firsthand.

“In the face of the pressure and anxiety surrounding early admission, we remain committed to the nonbinding aspect of Early Action that allows admitted students until May 1 to reply,” said Fitzsimmons. “The senior year provides an opportunity to continue to explore which college will be the best match for a student’s interests.”