When the sky turned black 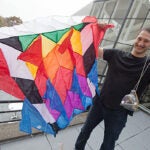 Ken Burns’ cutting-room floor must be a horrible thing to behold.

Burns, the acclaimed documentary filmmaker, outlined a philosophy for making films that includes ruthless cutting and a conviction that making the best overall film sometimes means slashing even great scenes if, for one reason or another, they slow the story flow.

He told a story during an appearance at Harvard Wednesday about the making of a documentary on Mark Twain that included a scene from Twain’s “Life on the Mississippi,” showing his sleepy hometown of Hannibal, Mo., perking to life with the arrival of a riverboat and then falling back into slumber after the boat leaves.

The scene was good, but Burns felt that the film dragged a bit later on, fatiguing viewers. Burns traced the fatigue to that scene, observing that the flat element isn’t always where its effect is felt.

“It was a great, great scene, but it had to go,” Burns said. “You’ve heard about the cutting-room floor. It’s not filled with anything that is bad. It’s all good stuff, and sometimes stuff that is better than any particular moment that you might be able to isolate in the final film.”

Burns showed clips from his latest film, “The Dust Bowl,” and fielded questions from the audience at Boylston Hall on Wednesday. The event, sponsored by the Harvard University Center for the Environment, was moderated by Robin Kelsey, the Shirley Carter Burden Professor of Photography and chair of the Department of the History of Art and Architecture.

Burns’ latest documentary chronicles the environmental disaster that struck the Great Plains in the 1930s. It was caused by a severe drought, aggravated by decades of poor agricultural practices during which the deep-rooted, soil-holding native grasses had been turned over and replaced by agricultural crops.

The four-hour, two-part film, which premieres Nov. 18 and 19 on public television, includes interviews with more than two dozen Dust Bowl survivors, who tell of storms so dense that they blacked out the sun and raged for hours and even days. The grit was carried on winds that blew so hard it could damage eyes, and it was so fine that it got into everything, including mouths and lungs, where it could kill by causing pneumonia.

Analysts featured in the film called the Dust Bowl one of the largest human-created environmental disasters in U.S. history.  Those who lived through it said it is impossible to exaggerate its harshness. The 40- to 60-mile-per-hour winds created “black blizzards” that struck 14 times in 1932 and 38 times in 1933. One witness described it as “two midnights in a jug.”

Unable to grow food, farmers abandoned their fields. Through the course of the disaster, rural counties lost sizable parts of their population, with Morton County, Kan., faring among the worst, losing nearly half.

The biggest challenge in making the documentary, Burns said, was finding people who had lived through the Dust Bowl storms. The researchers eventually found 29 people whom they could interview, 26 of whom made it into the final version. Those interviews were augmented with hundreds of archival sources, photographs, and interviews with experts who’ve studied the era.

The research and production of the film had an urgency because of the advanced age of those who lived through the ’30s. About half of those who were filmed have since died, Burns said.

The filmmaking process described by Burns includes constant revision, rewriting, and research that occurs throughout the process. He also treats music as a central part of the film. Rather than tacking it on at the end, it gets put in place first to help dictate pacing and rhythm. The filmmaking planning extends a decade into the future, Burns said, with future films in the offing on the Central Park Five, the Roosevelts, Vietnam, and Jackie Robinson.

“I’ve always said that if I were given 1,000 years to live, I wouldn’t run out of topics in American history,” Burns said.