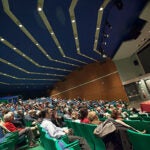 Tipping science on its head

Her enigmatic expression has been the topic of artistic debate for hundreds of years. But the reason the Mona Lisa’s mouth — part smile, part pursed lip — is so confounding has to do with the eyes, according to one Harvard scientist.

More specifically, Leonardo da Vinci’s 16th-century masterpiece beguiles observers because of the way their gaze jumps around the picture — from the Mona Lisa’s mouth, to her eyes, to her forehead. Where a person focuses his or her eyes determines the extent of the subject’s smile, said Margaret Livingstone during a recent talk.

While many art historians argue that the puzzling effect appears because the Mona Lisa’s “smile is blurry,” Livingstone contends it’s because of a fundamental difference between a person’s central and peripheral vision.

“If you look at her eyes and then look at her mouth, doesn’t she seem cheerier when you are looking at her eyes?” Livingstone asked the crowd in an Emerson Hall lecture room on Wednesday. “That’s not your imagination, that’s something really low level, and it has to do with the fact that your acuity falls off from the center of gaze quite a lot.” In other words, a person’s peripheral vision is terrible at discerning fine detail. When a viewer looks at the Mona Lisa’s eyes instead of her mouth, their peripheral vision notices the shadows around her cheeks that seem to expand her smile and make her appear cheerier.

“If you take home any message from my talk today, I hope you will take home the idea that vision is information processing, not image transmission,” said Livingstone, a Harvard Medical School professor of neurobiology who specializes in how the brain receives and processes visual information. During the Mind/Brain/Behavior 2012-2013 Distinguished Harvard Lecture, Livingstone delved into several masterworks to explore what happens when we look at a work of art.

Luminance
Livingstone, author of  “Vision and Art: The Biology of Seeing,” noted how sections of certain paintings, particularly impressionist works, almost appear to move. The effect, she said, relates to the relative luminance the eyes are able to detect between the painting’s colors. The closer two colors are in luminance, said Livingstone, the more they seem to shimmer.

Face value
Primates have an extraordinary ability to process faces, Livingstone said. She proved her point by rapidly flashing pictures of familiar faces on a screen at the front of the room. “You are seeing these images in a tenth of a second, and yet you are not only detecting faces, you are recognizing particular individuals.” Many in the crowd nodded in agreement.

“We can do it better than any computer program,” she said.

Humans are so adept at recognizing faces because particular regions of our temporal lobes are strictly dedicated to the task. In addition, “face cells code how any given face differs from the average face,” she said, and they can do so almost instantly.

Livingstone said that artists “were way ahead of us on this.” They understood that a straightforward, vertical line drawing of a face is harder to recognize than a caricature. That’s because a caricature, explained Livingstone, is when “you take somebody, you compare them to the average, and then you exaggerate the differences.”