Tipping science on its head 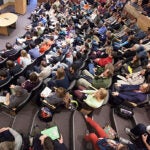 When the sky turned black

Shirley Tilghman vividly remembers the science experiment that changed her life. As a child, the distinguished molecular biologist and Princeton University president loved math and solving puzzles, but it was in college that she had her “aha” moment in a lab.

For months, Tilghman, a second-year chemistry concentrator, had tried to convert a biologically inert molecule into penicillin. One morning she checked her experiment, expecting to see “happily growing E. coli,” as she had countless times before. Instead, she found she had successfully synthesized the famous antibiotic in her test tube.

“Rockets went off in my head,” recalled Tilghman. “It would have been impossible for me not to be a scientist after that euphoric moment.”

Undergraduates need those “aha” moments early in their college careers so that they become engaged with the sciences, Tilghman told a crowd of faculty, administrators, and students who gathered at Harvard’s Science Center for the Dudley Herschbach Lecture, an annual event that honors Herschbach, the Frank B. Baird Jr. Professor of Science Emeritus.

Harvard President Drew Faust introduced Tilghman and praised her for her efforts, as both an administrator and a teacher, to elevate and redefine science education.

Tilghman, who will step down at the end of the academic year, argued that exposing students early to groundbreaking scientific inquiry, eliminating disciplinary boundaries, offering students hands-on approaches to the sciences and engineering, adopting innovative teaching techniques, and encouraging committed teachers are all critical parts of the effort to improve science pedagogy.

A leader in molecular biology and a founding member of the National Advisory Council of the Human Genome Project for the National Institutes of Health, Tilghman outlined her “inverted pyramid” approach to science education during her talk. University students, she argued, should be exposed to big scientific ideas as a first step in their learning, rather than a last step. Then, said Tilghman, “We need to connect the facts and theories and hypotheses and theorems we teach to the great task of solving the questions behind the big ideas.”

Tilghman uses that approach in her freshman seminars, where she delves into the complicated world of epigenetics with her students by having them read the latest papers on heady topics such as genomic imprinting and X chromosome inactivation in mammals. Such reading, she said, helps her students “understand the concepts and, most importantly, the ways in which scientists go about exploring big ideas. Furthermore, students learn that scientists do not have all the answers.”

Tilghman said that Princeton offers students the “opportunity to actually be scientists and engineers.” “The earlier undergraduates enter our research labs, the greater the likelihood that they will have a transformative experience,” said Tilghman, who cited studies that link early research experiences to the prospect of persisting with a scientific career, and her own early experience with scientific discovery.

But in addition to reworking their science curriculums to inspire science concentrators, universities need to offer classes that help to demystify the sciences for future policymakers and a discriminating public, she said.

Science education, Tilghman said, “is also about instilling a comprehension of the scientific method in those who will never see a laboratory and giving them a full appreciation of the transformative role that scientific and technological innovation plays in daily life.”

Tilghman said innovative teaching practices, such as the use of interactive clickers, case studies, and cooperative student learning, are all “challenging the traditional lecture format.” She noted that although experiments in online education are still in their early days, such efforts are “bringing to our teaching the same innovative spirit that we bring to our scholarship.” She praised the $40 million gift from Rita E. and Gustave M. Hauser to Harvard that established an initiative to support innovative teaching and learning across the University.

Tilghman echoed the sentiments of analysts who fear that America is on the verge of losing its global influence, in part because of its inability to produce and keep a workforce of talented scientists and engineers.

“Whether the measure is patents issued or papers published or degrees awarded, the United States is losing its historic market share of scientific and technological activity. Against this backdrop, it has become imperative that we renew our commitment to producing graduates capable of fundamental research and technological innovation.”