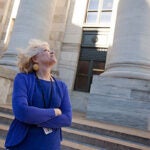 Bluefin tuna stocks are endangered. Cod is fished out. Halibut? Don’t even think about it. What’s a seafood-loving university to do?

That’s been the dilemma facing Harvard University Dining Services (HUDS) in its efforts to make its operations — and servings — more sustainable. In recent years, HUDS has embraced the University’s sustainability goals. It has revamped its kitchens to use less energy, instituted composting to reduce food waste, and taken pains to buy bread and produce from local bakeries and farmers, ensuring its food is not only fresher when it reaches the table, but also that less fuel is burned en route.

Over the past year, Dining Services has turned its attention to the seafood on its plates — thousands of pounds of tuna and tilapia, shrimp and salmon, mussels and mahi-mahi. After months of planning, the results are reaching the menu this fall. Students are seeing new species (swai, for example), as well as familiar offerings from more sustainable sources, such as Prince Edward Island mussels and shrimp caught in Maine waters.

“It’s part of our overall program in sustainable dining,” said David Davidson, managing director of HUDS. “We’re hoping we can come up with guidelines we can share with other schools.”

The sustainable seafood program has been successful, but a challenge, said Davidson and other Dining Services officials. With a dizzying array of species to choose from, some with both healthy and unhealthy stocks, and others with farmed and wild alternatives, buying and serving sustainable seafood is more difficult than it sounds. And in addition to finding and purchasing the fish, officials have to make sure the recipes appeal to students’ taste buds.

“At the end of the day, if we serve something and nobody eats it, we haven’t accomplished anything,” said Crista Martin, associate director of marketing for Campus Services.

To help sort through the confusion, Dining Services has been working with Barton Seaver, a Washington, D.C., chef, sustainable seafood advocate, and National Geographic fellow. Seaver, who is on the advisory board of the Harvard School of Public Health’s Center for Health and the Global Environment, is working to design sustainable seafood guidelines for large institutions, drawing on his experience with HUDS and similar efforts at two Harvard-affiliated hospitals.

Seaver, author of a book on sustainable seafood, “For Cod and Country,” said he’s found Dining Services officials, including Davidson and Director for Culinary Operations Martin Breslin, “exceptionally receptive” to his efforts, both because fish is a healthy menu option for students, and because ensuring it is sustainable will help the long-term health of the stock.

“It’s the right thing to do,” Breslin said.

Overharvesting has been the major culprit in harming stocks. Schools of bluefin tuna, for example, range across ocean basins, putting them outside the regulatory schemes of any one nation. With flesh prized particularly for sushi, bluefin were overharvested until conservation groups began sounding the alarm. The bluefin tuna story is a familiar one, with similarities in the plight of bottom-dwelling cod off the New England coast and Chilean sea bass.

Farmed fish have also deviated from sustainability principles, with waters near farms fouled by waste and worries about genetic contamination should farmed varieties escape and breed with wild populations.

Seaver said the answer is not to switch to land-based sources, but to sensibly use marine resources, switching to species with healthy numbers or to different stocks of a fish that may be ailing in one location, such as from New England to European stocks of Atlantic cod. The result will be not only healthier oceans, but an economically healthier fishing industry.

“The problem is we have eaten or irrationally used too many fish in the sea,” Seaver said. “However, we must … continue to participate in the bounty of the sea.”

The idea that seafood should be harvested sustainably is not a new one, of course. Guidelines for individuals have been drafted by several sources, including the Monterey Bay Aquarium. The problem is that those guidelines aren’t translatable to the demands of a large institution, Dining Services officials said. Unlike individuals, institutions plan menus much further ahead, need large volumes for a single meal, and have less budgetary flexibility. For a single meal of salmon, for example, Dining Services needs 800 to 1,000 pounds of fish, Breslin said.

Those constraints underlie Seaver’s efforts to draft guidelines to help large institutions increase the sustainability of their seafood purchases. Martin said it’s important to keep in mind, however, that becoming a sustainable institution is not about reaching a static goal. Rather, because the health of fish stocks waxes and wanes, sustainability is a moving target that Dining Services has to constantly keep in its sights.

For students in Harvard’s dining halls, what that means is new offerings such as swai, farmed mussels, and salmon from a Canadian fish farm whose deepwater site and operational practices have earned it certificates for sustainability. While concern about waste from fish farms and the danger of domesticated stocks escaping and breeding with wild fish have led environmentalists to frown on aquaculture as a seafood source, Seaver’s position is that aquaculture is needed to provide an alternative to wild stocks but that aquaculture operations should be chosen for sustainability.

Alastair Su, a junior history major who serves as a food literacy representative in Mather House, said that though sustainability is important, most of his fellow students aren’t paying close attention to the sources of their food. Like most people, they’re mainly concerned with quality and taste, Su said, giving Dining Services high marks in those areas.

“I think it’s great,” Su said of Dining Services’ efforts to increase sustainable seafood offerings on its menu. “Working with Seaver is an important step overall, it’s definitely a step in the right direction.”