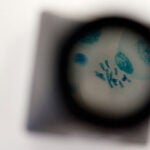 One cell does it all: Sensory input to motor output in extraordinary neuron

It’s one of the basic tenets of biological research — by studying simple “model” systems, researchers hope to gain insight into the workings of more complex organisms.

Caenorhabditis elegans — a tiny, translucent worm with just 302 neurons — has long been studied to understand how a nervous system is capable of translating sensory input into motion and behavior.

New research by the laboratory of Professor Aravi Samuel in the Harvard Physics Department and the Center for Brain Sciences, however, is uncovering surprising sophistication in the individual neurons of the worm’s “simple” nervous system.

Quan Wen, a postdoctoral fellow in the Samuel lab who spearheaded the research, has shown that a single type of neuron in the C. elegans nerve cord (the worm equivalent of the spinal cord) packs both sensory and motor capabilities. The locomotory systems of most creatures, including humans, use different neurons to gather sensory information about animal movement or to send signals to muscle cells. C. elegans encodes an entire sensorimotor loop into one particularly sophisticated type of motor neuron. The work is described in the journal Neuron.

“This type of circuit is completely new — this is not the way people think about any motor circuit,” Samuel said.

The discovery arose from researchers asking a simple question: How does C. elegans organize its movements?

“What sent us down this road was a phenomenon that we’ve observed in the lab,” Samuel explained. “If we place the worms in a wet environment, they will swim. On surfaces, however, they crawl. The question was how the animal ‘knew’ to do each. The answer had to be feedback: Something is telling the worm that it’s in a low-viscous environment here, and a high-viscous environment there.

“The general name for this is ‘proprioceptive feedback,’ ” Samuel continued. “It’s that process that allows your brain to understand what each of your legs is doing and coordinate your ability to walk, it gives you an awareness of your body posture. The real puzzle in this case, however, was that C. elegans has so few neurons … we didn’t understand how proprioceptive feedback could come back into the system.”

To test how the worm receives the feedback, the lab turned to microfluidic devices designed by the laboratory of George Whitesides, the Woodford L. and Ann A. Flowers University Professor in the Harvard Chemistry Department. These devices — small machines constructed from soft, silicone rubber — can change shape when inflated with air or liquid, ideal for probing the wiggles of worms.

The scientists were able to restrain the movement of the worms’ midsections while leaving their head and tail free to move. The results were immediately illuminating: While the heads continued to move, the tails remained immobile.

“That very simple experiment was our first clue to what was going on with the worms’ neural system,” Samuel said. “Basically, the tail is detecting the bending of the middle and then bending. By holding it still, we’re interrupting that message.”

The finding was surprising, Samuel said, because earlier research had showed that other, similar animals, such as leeches and lamprey, behaved in very different ways.

“If you restrain the middle portions of larger undulatory animals, the head and the tail can move independently,” he said. “The role of feedback in bigger animals is simply to coordinate independent rhythmic units. That’s not what we see in C. elegans — the tail does not move by itself, feedback is the signal that drives motion itself. The tail cannot move unless the head moves first. By distributing a chain of these sensorimotor reflex arcs along the body, an undulatory wave that starts at the head travels to the tail.”

Later tests, in which researchers used microfluidic devices to force the worms’ midsection to bend, led to a detailed characterization of the feedback system in C. elegans.

Just as they had in earlier experiments, the worms’ tails initially bent in response to movements in their midsections. When hit by a laser, however, the neurons controlling such movement were inactivated, causing the animals’ tails to stay locked in a single position.

“That proves that the whole sensorimotor loop is contained in these neurons,” Samuel said. “One of the general rules of biology is that the fewer neurons a creature has, the ‘smarter’ each neuron has to be. With just 302 neurons, each neuron in the worm can become incredibly sophisticated.”

“This role of proprioceptive feedback and how it helps organize the movements of this animal, it’s an entirely new principle of locomotory control,” he continued. “This research shows that all that functionality is in the motor circuit. The head doesn’t have to tell every segment of the body what to do, it can just give a master command, and the rest of the body follows through local sensorimotor interactions.”