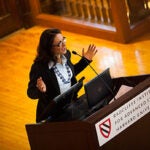 ‘Having it all’ at Harvard

Robert Dorfman, the late David A. Wells Professor of Political Economy, Emeritus, was a leader in the introduction of mathematical methods to economics in the twentieth century. He died on June 24, 2002, at his home in Belmont, Massachusetts.

Dorfman made important contributions, particularly as a pioneer in the use of linear programming, characterizing production relationships in terms of individual activities with fixed coefficients. He collaborated in 1958 with MIT Professors (and later Nobel laureates) Robert M. Solow and Paul A. Samuelson on the classic Linear Programming and Economic Analysis.

He believed that mathematical methods were key – both as analytical tools and as means of exposition. In this regard, Jerry Green, John Leverett Professor in the University and David A. Wells Professor of Political Economy, said at Dorfman’s memorial service in 2002, “He was an ambassador for the future of our field.”

Dorfman wrote in 1954: “Is mathematics necessary in social science? I suppose not. It is quite conceivable that all problems could be solved by verbal means, just as it is possible to find that the square root of CXCVI is XIV. Such methods, though, would be not only painful but fearfully inefficient.”

Dorfman also made significant contributions to environmental economics. Beginning in 1972, he edited with his wife, Nancy S. Dorfman, three editions of Economics of the Environment. Testimony to the lasting value of this work is the fact that it is now in its sixth edition (edited since 2000 by Robert Stavins, Albert Pratt Professor of Business and Government at the Kennedy School).

In this realm, Dorfman understood the importance of the underlying natural science. His analysis of water resources in Pakistan, for example, drew on collaborations with engineers and hydrologists. He was for many years an affiliate of Harvard’s Center for Population Studies, where he helped introduce optimization methodologies for resource management to developing countries.

Dorfman’s career at Harvard spanned 32 years. He was Professor of Economics from 1955 to 1972, and then David A. Wells Professor of Political Economy until his retirement in 1987. He was known by junior colleagues as a marvelous mentor. Henry Rosovsky once said that the kindest five words that can be said to a young scholar are, “I have read your thesis.” Jerry Green has observed, “That was exactly what Bob said to me the first time we met. I am sure he said the same to many others.”

From 1976 to 1984, Dorfman served as editor of the Quarterly Journal of Economics. Green, an associate editor, observed his style: “I saw how he worked with articles and authors of all kinds. Diamonds in the rough had to be polished.”

Dorfman enjoyed a reputation as a masterful teacher, especially at the graduate level. He taught mathematical economics, microeconomic theory, macroeconomic theory, and econometrics, and thereby – in the words of Dale Jorgenson, Samuel W. Morris University Professor – “almost single- handedly brought the Harvard graduate program to the level of competing institutions.” Jorgenson recalls the course he took from Dorfman, and counts himself among “the fortunate students who were brought to the frontier of research in economic theory.”

In the 1970s, Dorfman launched a seminar series on the economics of information and organizations with Professor Kenneth Arrow and Richard Zeckhauser, Frank Plumpton Ramsey Professor of Political Economy at the Kennedy School. Generations of young scholars benefitted from this colloquium, including Green, who later became a co-chair. Zeckhauser recalls that “the most faithful presenter was Eric Maskin (now Professor of Economics), who was then starting to develop his pioneering work in mechanism design that would ultimately win him the Nobel Prize.”

Born on October 27, 1916, in New York City, Dorfman received his B.A. in mathematical statistics from Columbia College in 1936 and an M.A. in economics from Columbia University in 1937. Dorfman was a wartime pioneer in operations research. From 1939 to 1943, he worked as a statistician for the federal government, and then served during World War II as an operations analyst for the U.S. Army Air Force, based in the Southwest Pacific theater and in Washington, D.C.

After the war, Dorfman enrolled at the University of California, Berkeley, earning his Ph.D. degree in economics in 1950. He joined the faculty at Berkeley, where he was an associate professor of economics when he moved to Harvard in 1955.

Among his scholarly contributions were four classic articles in the American Economic Review: “Mathematical or ‘Linear’ Programming” (1953), “Operations Research” (1960), “An Economic Interpretation of Optimal Control Theory” (1969), and “Incidence of the Benefits and Costs of Environmental Programs” (1977).

Thirty years later, his co-author Robert Solow characterized him as “always polite, even self- deprecating, never assertive, he nevertheless stood his ground. If Bob Dorfman mildly and quizzically expressed some hesitation about your pet idea, it was always a good move to look up, just in case a boulder was about to crash down on you—politely, of course.”

According to his wife, Nancy, Dorfman turned to mathematics in college as a substitute for poetry, after concluding that he did not have a future as a poet. But his love of literature was reflected in the clarity and grace with which he explained complex economics in simple terms.

Robert Dorfman is survived by his wife, Nancy, of Lexington; his son, Peter, of Belmont; his daughter, Ann, of Newton; granddaughter, Joni Waldron, of Washington, D.C.; and grandson, Loren Waldron, of Newton.