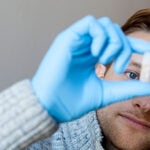 The high level of casualties came at a time when far fewer colleges played a more dangerous brand of football, and led to a public outcry — Columbia University banned the game — and to the intervention of a prominent Harvard alum: President Theodore Roosevelt.

Roosevelt called representatives from Harvard, Yale, and Princeton to the White House and urged them to discuss rule changes that would make the game safer. They approved the forward pass and the 10-yard distance to a first down, and established the precursor to the National Collegiate Athletic Association (NCAA) to oversee the sport.

On Thursday, National Football League (NFL) Commissioner Roger Goodell recalled those turn-of-the-century changes — and Harvard’s role in them — to highlight current reforms meant to enhance player safety. Those changes, he said, are part of an evolution that will continue

“Football has always evolved and it always will,” Goodell said. “My commitment has been and continues to be to change the culture of football to ensure player safety.”

Goodell, who spoke at the Harvard School of Public Health (HSPH), leads the league at a time when player safety is in the spotlight. Several lawsuits have been filed by former players arguing that the league did too little to protect them against the negative effects of repeated concussions, which can be debilitating even years removed from the field.

The league, Goodell said, can employ a variety of tactics to improve safety, from new equipment to rules changes to guidelines for sideline medical personnel. In recent years, rules have been enacted to protect quarterbacks and defenseless receivers, to eliminate helmet-to-helmet contact, and to minimize injuries on kickoffs, the game’s most dangerous play. Horse-collar tackles, facemasking, and head slaps have also been targeted, while awareness has been raised to protect against heat- and hydration-related illness.

The push to make the game safer, Goodell said, extends to all levels, including high school, where the NFL has pushed for state legislation mandating players be removed from games in the event of a concussion and not return until medically cleared.

HSPH Dean Julio Frenk introduced Goodell, who spoke in the Kresge Building cafeteria before about 200 as part of the Dean’s Distinguished Lecture series. Frenk said that sports are an important part of ensuring a healthy lifestyle and fighting the nation’s obesity epidemic, but that safety is paramount. When it comes to sports injuries, he said — particularly concussions — a lot of work remains.

In his talk, delivered two days before the Harvard-Yale game, Goodell highlighted Harvard’s central role in the game’s origins. The football first played at Harvard in 1873 was a very different game, however, with little protection for players and dangerous tactics like the flying wedge — outlawed in the 1890s. He cited Harvard successes past and present — eight national championships and 20 players inducted into the college football Hall of Fame; graduates Ryan Fitzpatrick and Matt Birk playing, respectively, for the Buffalo Bills and the Baltimore Ravens.

“Football is embedded in your traditions, and your contributions define how we play the game,” Goodell said.

Goodell highlighted the importance of sports in fighting the obesity epidemic and cited the NFL’s continuing popularity in his optimism about the league’s future. Enthusiasm for the game extends well below the professional level, he said, with 75,000 college players, 1.1 million high school players, and 6 million kids playing below the high school level.

Making the game safer will require more than rules and equipment changes, Goodell said. It will require a change in a culture that has always prized toughness and the ability to play through pain and injury. Though there has been a greater effort in recent seasons to identify players who suffer concussions and remove them from the game, that battle has to be waged by more than just the sideline medical personnel. Players themselves — often reluctant to come out of the game — have to be more forthcoming about their injuries, Goodell said.