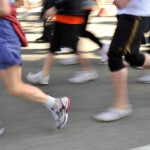 How much exercise is enough?

'Lung-on-a-chip' sets stage for next wave of research

Researchers at the Wyss Institute for Biologically Inspired Engineering at Harvard University have mimicked pulmonary edema in a microchip lined by living human cells, as reported today in the journal Science Translation Medicine. They used this “lung-on-a-chip” to study drug toxicity and identify potential new therapies to prevent this life-threatening condition.

“Major pharmaceutical companies spend a lot of time and a huge amount of money on cell cultures and animal testing to develop new drugs,” says Donald Ingber, founding director of the Wyss Institute and senior author of the study, “but these methods often fail to predict the effects of these agents when they reach humans.”

The lung-on-a-chip device, which the team first described just two years ago, is a crystal-clear, flexible polymer about the size of a memory stick that contains hollow channels fabricated using computer microchip manufacturing techniques. Two of the channels are separated by a thin, flexible, porous membrane that on one side is lined with human lung cells from the air sac and exposed to air; human capillary blood cells are placed on the other side with medium flowing over their surface. A vacuum applied to side channels deforms this tissue-tissue interface to re-create the way human lung tissues physically expand and retract when breathing.

Wyss Technology Development Fellow Dongeun Huh, who also holds appointments at Harvard Medical School  (HMS) and Boston Children’s Hospital, studied a cancer chemotherapy drug called interleukin-2 — or IL-2, for short — in the lung-on-a-chip. A major toxic side effect of IL-2 is pulmonary edema, which is a deadly condition in which the lungs fill with fluid and blood clots.

When IL-2 was injected into the blood channel of the lung-on-a-chip, fluid leaked across the membrane and two tissue layers, reducing the volume of air in the other channel and compromising oxygen transport — just as it does in lungs of human patients when it is administered at the equivalent doses and over the same time course. Blood plasma proteins also crossed into the air channel, leading to the formation of blood clots in the air space, as they do in humans treated with IL-2.

But one result came as a surprise.

It turns out the physical act of breathing greatly enhances the effects of IL-2 in pulmonary edema — “something that clinicians and scientists never suspected before,” says Ingber, the Judah Folkman Professor of Vascular Biology at HMS.

When the team turned on the vacuum attached to the chip to simulate breathing, it increased fluid leakage more than threefold when treated with the clinically relevant IL-2 dose, and the Wyss team confirmed that the same response occurs in an animal model of pulmonary edema. This result could suggest that doctors treating patients on a respirator with IL-2 should reduce the tidal volume of air being pushed into the lungs, for example, in order to minimize the negative side effects of this drug.

Most exciting for the future of drug testing was the Wyss team’s finding that “this on-chip model of human pulmonary edema can be used to identify new potential therapeutic agents in vitro,” Ingber says. The pulmonary edema symptoms in the lung-on-a-chip disease model could be prevented by treating the tissues with a new class of drug, a transient receptor potential vanilloid 4 (TRPV4) channel blocker, under development by GlaxoSmithKline (GSK). In a separate study published by the GSK team in the same issue of Science Translation Medicine, the beneficial effects of TRPV4 inhibition in reducing pulmonary edema were independently validated using animal models of pulmonary edema caused by heart failure.

“In just a little more than two years, we’ve gone from unveiling the initial design of the lung-on-a-chip to demonstrating its potential to model a complex human disease, which we believe provides a glimpse of what drug discovery and development might look like in the future,” Ingber says.

“Organs-on-a-chip represents a new approach to model the structure, biology, and function of human organs, as evidenced by the complex breathing action of this engineered lung. This breathing action was key to providing new insight into the etiology of pulmonary edema,” said James M. Anderson, director of the National Institutes of Health (NIH) Division of Program Coordination, Planning, and Strategic Initiatives, which provided partial support for the research through the Common Fund’s Regulatory Science program. “These results provide support for the broader use of such microsystems in studying disease pathology and hopefully for identifying new therapeutic targets.”

The work was funded by the NIH, the Food and Drug Administration, Defense Advanced Research Projects Agency, and the Wyss Institute for Biologically Inspired Engineering at Harvard University.