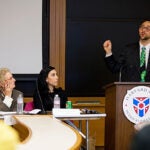 Harvard researchers are challenging the popular portrayal of the Ebola virus and other viral hemorrhagic fevers as emerging, highly rare, and deadly diseases that cannot be researched or understood using traditional epidemiological techniques.

In a Nov. 9 paper in the journal Science, Harvard research scientist Stephen Gire and Pardis Sabeti, a Harvard associate professor of organismic and evolutionary biology, present new evidence that viral hemorrhagic fevers may actually be far more common — and perhaps much older — than previously thought. And while more outbreaks of such ailments, which include Lassa fever and the Marburg virus, may be identified when technology makes the diseases easier to diagnose, the researchers argue that the increase may not mean the diseases are spreading.

“It is becoming clear that these diseases are more common than is perceived by the Western media, and that some are even endemic to certain parts of the world,” Sabeti said. “As our technology and reach improve, we will likely begin to detect many more diseases once thought to be sporadic and rare, so the outbreaks we see may just be ‘outbreaks of diagnosis.’ ”

Although researchers typically describe Ebola and other viral hemorrhagic fevers as exploding into human populations in the 1970s, Gire believes the story should start much earlier.

While it’s true that the diseases were unknown to science before those outbreaks, there is powerful genetic evidence that they have existed, and were likely infecting people in sub-Saharan Africa, for thousands of years.

“In the viral studies field, it’s become doctrine that diseases like Ebola are emerging diseases when it comes to human populations,” Gire said. “What we’re saying in this paper is that there is growing evidence that they are actually very, very old, and that some populations may have been exposed to them for millennia. That’s a new concept because it’s widely thought that these diseases kill virtually everyone who contracts them.”

Though being diagnosed with Ebola is often portrayed as tantamount to a death sentence, Gire said tests have shown that surprisingly high numbers of people in regions prone to outbreaks carry antibodies to the disease, suggesting they may be contracting the disease and living to tell the tale.

In some populations in Africa, Gire said, as many as 20 percent of people carry antibodies for Ebola, and as many as 50 percent test positive for antibodies to Lassa fever.

“In some Ebola outbreaks, we’ve seen fatality rates of nearly 90 percent,” Gire said. “Given that, you would expect the seroprevalence — a measure of antibodies to the virus — to be low because few people are surviving, so those antibodies aren’t being passed on. But what we actually see is that the rates are higher than expected.

“What that suggests is that people are actually being exposed to these viruses, producing antibodies, and surviving,” he said. “That is very counterintuitive to the current model, which says these outbreaks flare up, kill a number of people, and the disease dies back down until it re-emerges. There is more and more evidence that these diseases are much older, and that they are circulating much more widely, than we ever thought.”

That’s not to suggest that a worldwide Ebola outbreak may be just around the corner. If anything, Gire said, the notion that the disease is more common than thought offers hope to researchers working to unlock the secrets of Ebola and other viral hemorrhagic fevers.

The typical response to an outbreak, Gire said, is to quarantine the area while doctors from the Centers for Disease Control or the World Health Organization collect samples for testing. The challenge for researchers, however, is that nearly all of those samples are used for diagnosis, leaving little, if any, material for other testing.

“What we’re saying is these viruses are actually simmering constantly in certain parts of the world,” Gire said. “If we go into these communities and begin building relationships with these populations, we can set up long-term research sites, and the patients will begin to come in.”
Harvard researchers have done just that, Gire said, with Lassa fever, working with international partners to set up clinics in both Sierra Leone and Nigeria.

“Not only do we have many Lassa patients who come into those clinics, but we have other patients who come in as well,” he said. “What we’re doing is taking these very standard disease approaches that really have not been widely applied to viral hemorrhagic fevers like Lassa and Ebola, and we’re finding that they can work.”

“By recognizing that these diseases are already circulating in clinics around the world, and identifying where they are more prevalent, we can build capacity to study those diseases now, rather than wait for the next outbreak to begin the process,” Sabeti said. “In this way, we can be proactive rather than reactive in fighting off potential pandemics.”