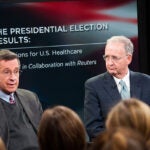 A new study has found that participating in an eight-week meditation training program can have measurable effects on how the brain functions even when someone is not actively meditating. In their report in the November issue of Frontiers in Human Neuroscience, investigators at Harvard Medical School-affiliated Massachusetts General Hospital (MGH), Boston University (BU), and several other research centers also found differences in those effects based on the specific type of meditation practiced.

“The two different types of meditation training our study participants completed yielded some differences in the response of the amygdala — a part of the brain known for decades to be important for emotion — to images with emotional content,” says Gaëlle Desbordes, a research fellow at the Athinoula A. Martinos Center for Biomedical Imaging at MGH and at the BU Center for Computational Neuroscience and Neural Technology, corresponding author of the report. “This is the first time that meditation training has been shown to affect emotional processing in the brain outside of a meditative state.”

Within three weeks before beginning and three weeks after completing the training, 12 participants from each group traveled to Boston for fMRI brain imaging at the Martinos Center’s state-of-the-art imaging facilities. Brain scans were performed as the volunteers viewed a series of 216 different images — 108 per session — of people in situations with either positive, negative, or neutral emotional content. Meditation was not mentioned in preimaging instructions to participants, and investigators confirmed afterward that the volunteers had not meditated while in the scanner. Participants also completed assessments of symptoms of depression and anxiety before and after the training programs.

“We think these two forms of meditation cultivate different aspects of mind,” Desbordes explains. “Since compassion meditation is designed to enhance compassionate feelings, it makes sense that it could increase amygdala response to seeing people suffer. Increased amygdala activation was also correlated with decreased depression scores in the compassion meditation group, which suggests that having more compassion towards others may also be beneficial for oneself. Overall, these results are consistent with the overarching hypothesis that meditation may result in enduring, beneficial changes in brain function, especially in the area of emotional processing.”

The study was supported by grants from the National Center for Complementary and Alternative Medicine, including an American Recovery and Reinvestment Act grant to Boston University.