Imagine if everyone gave 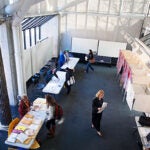 Last year, Harvard Community Gifts, an annual drive to encourage giving in the holiday season, raised more than half a million dollars in support of more than 450 nonprofit organizations. This year, the campaign’s organizers have adopted an even-more-ambitious goal: “Imagine what we could do if everyone gave?”

The Harvard Community Gifts campaign launches today. Faculty and staff can choose to donate by payroll deduction by Dec. 7, or may elect to give by check or credit card through Jan. 15. Harvard has established a user-friendly website where individuals can select their charity and donation amount.

On Tuesday morning, roughly 100 volunteers — Harvard employees, who, in a revived concept from years past, will serve as ambassadors to their units and departments — met at the Barker Center for a kickoff event with Marilyn Hausammann, vice president for human resources. At most Schools, a faculty member and a staff member will serve as campaign co-chairs, in an effort to broaden outreach and boost participation across the University.

The Community Gifts fundraiser is a decades-long tradition dating to Harvard’s efforts in providing food and clothing to soldiers and to support hospitals during World War II.

In recent years, Harvard faculty and staff have given generously to Harvard-sponsored relief efforts for people affected by the Pacific tsunami, Hurricane Katrina, and the earthquakes in Haiti and Japan. Closer to home, Harvard employees contributed $25,000 to a relief fund for their Haitian-American co-workers in 2010, and more than $10,000 to the Jimmy Fund’s Rally Against Cancer Campaign in 2011.