How much exercise is enough? 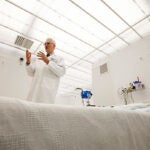 We all know that exercise is good for you, but how good? While previous studies have shown the link between physical activity and a lower risk of premature mortality, the number of years of life expectancy gained among persons with different activity levels has been unclear — until now.

In a new study from Harvard-affiliated Brigham and Women’s Hospital (BWH), in collaboration with the National Cancer Institute, researchers have quantified how many years of life are gained by being physically active at different levels, among all individuals as well as among various groups having different body mass indexes (BMI).

The study was published in PLOS Medicine on Nov. 6.

In pooled data from six prospective cohort studies, the researchers examined associations of leisure-time physical activity of a moderate to vigorous intensity with mortality. They analyzed data from more than 650,000 subjects and followed subjects for an average of 10 years, analyzing more than 82,000 deaths. The large sample size allowed them to estimate years of life gained after the age of 40 among persons with different levels of physical activity and BMI.

The findings show that physical activity was associated with longer life expectancies across a range of activity levels and BMI groups. Participation in a low level of leisure time physical activity of moderate to vigorous intensity, comparable to up to 75 minutes of brisk walking per week, was associated with a 19 percent reduced risk of mortality compared with no such activity.

Assuming a causal relationship, which is not specifically demonstrated in this research, this level of activity would confer a 1.8-year gain in life expectancy after age 40, compared with no activity. For those who did the equivalent to 150–299 minutes of brisk walking per week — the basic amount of physical activity currently recommended by the federal government — the gain in life expectancy was 3.4 years.

These benefits were seen in both men and women, and among white and black participants. Importantly, they were also observed among persons who were normal weight, overweight, and obese. Participants faring best were those who were both normal weight and active: among normal weight people who were active at the level recommended by the federal government, researchers observed a gain in life expectancy of 7.2 years, compared with those with a BMI of 35 or more who did no leisure time physical activity (a 5-foot, 5-inch-tall person with BMI of 35 weighs 210 pounds).

“Our findings reinforce prevailing public health messages promoting both a physically active lifestyle and a normal body weight,” explained Steven C. Moore, research fellow at the National Cancer Institute and lead author of this study. These findings may also help convince currently inactive persons that even being modestly active is ‘‘worth it’’ for greater longevity, even if it may not result in weight control.