‘Having it all’ at Harvard 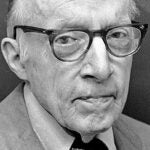 Lately, three little words have the power to turn a conversation among women on a dime. Harvard, home to ambitious female faculty and staff of many ages, isn’t immune to the national debate over “having it all.”

When the Atlantic published “Why Women Still Can’t Have It All,” Anne-Marie Slaughter’s 11,000-word manifesto on the myth of perfect work-life balance, earlier this year, it quickly became the most-read article in the magazine’s history. Likewise, when Harvard’s Committee on the Concerns of Women announced it would host a discussion of Slaughter’s essay last month, seats filled in record time.

The committee, whose lunchtime meetings have been a fixture on campus for more than three decades, was a natural host for the event. But the level of interest in a work-life discussion surprised even longtime board members, who watched in real time as the event’s 150 seats were filled through online registration in minutes. (They quickly added 50 more seats, which were claimed 20 minutes later.)

“We’ve never had this kind of response before,” said Nancy Costikyan, director of the Office of Work/Life and one of the event’s organizers. “It legitimates the public conversation around these issues.”

Interest in the October meeting, “Imperfect Balance,” was so high that the committee is hosting a follow-up event on Nov. 14 at the Monroe C. Gutman Library. The two discussions, both led by Francesca Dominici, professor of biostatistics and associate dean for information technology at Harvard School of Public Health, are just the start of a year’s worth of committee events focused on the theme of self-care for women.

“Just about every issue we are talking about — women’s advancement in the workplace, child care, flexibility — all come back to the question: How do women advocate for themselves, care for themselves, and remember their own needs in addition to every other obligation they’re trying to fulfill?” said Costikyan, the University’s liaison to the committee.

Costikyan hopes the events will help shed light on the resources that Harvard offers to help ease the modern tug-of-war between work and family obligations, especially for women, who on average assume a larger burden of child care (and elder care, a less-discussed topic).

For example, employees can already arrange for subsidized back-up child care through the University’s Parents in a Pinch and Just In Time Care programs (which also cover elder care and caregiving for employees themselves). The University distributes $3.5 million a year in child care scholarships for faculty and staff, and also offers a free consulting service for new parents. The WATCH Portal, an online service launched last year, helps connect parents with Harvard students and the children of Harvard employees looking for babysitting jobs, and has recently expanded to allow postings for tutoring and odd jobs.

In this PolicyCast episode from the Harvard Kennedy School, Anne-Marie Slaughter talks about her experience since publishing the The Atlantic article, how her thoughts on the subject have evolved, and what the implications are for public policy.

But while Harvard’s work-life benefits are robust, there is still work to be done regarding workplace flexibility, Costikyan said. Harvard Human Resources is currently piloting a new set of flexible work guidelines with the goal of understanding best practices when it comes to nontraditional schedules, job-sharing between employees, and telecommuting.

“I think people are hungry for it,” Costikyan said, though she acknowledged that modern workplace culture is not well designed to accommodate workers’ needs for flexibility. “You need to break down the components of resistance. Some people are afraid of flexible work arrangements. They’ve not seen them work well. They’ve been burned by poor designs. But in recent years we have learned a lot about how to make flexibility benefit wider units and departments, not just individual employees.”

At the October talk, held in Radcliffe Gymnasium, Dominici detailed her own experiences juggling roles as employee, boss, professor wife, mother, and, for a brief spell, caregiver to her 94-year-old Italian grandmother.

She recalled how she unknowingly did “serious damage” by coming back to teach two weeks after giving birth. While she had merely wanted an excuse to leave the house for a couple hours a week, she said, she unwittingly gave off the impression of being an intimidating superwoman to her younger female students.

Women are still underrepresented in academia and in other high-powered fields, she said, not because they’re not earning Ph.D.s or other necessary credentials, but because pressures to balance work and family cause many women to drop out.

“This is not a pipeline issue anymore,” Dominici said. “It’s not a woman’s issue — it’s a family issue and an economic issue.”

That sentiment was reflected in the small-group discussions following Dominici’s talk, where women from across Harvard’s Schools and departments brainstormed ideas for new work-life policies. Despite being well-versed in the work-life debate, Blue Magruder attended the committee event to meet others from across the University with a similar interest in the topic.

“This is something we’ve all been battling,” said Magruder, director of communications and marketing at the Harvard Museum of Natural History. “I think it’s great that people are aware of these issues and are asking how policies should change.”

Though her own son is out of the house and about to graduate from college, Magruder recounted the tough choices she and her husband made to juggle their equally demanding careers. When her son was in fifth grade, Magruder’s husband left his consulting job — which entailed flying half a million miles a year — to become a stay-at-home father.

“I refused to leave my nonprofit career,” Magruder said. “We had a family meeting, and my son said, ‘When Mummy comes to my games, all she does is talk to the other moms. When Dad comes, he makes constructive comments.’ So we just decided to see what we could do to make it work.”

Ultimately, her family’s arrangement worked well, she said, and she’s glad to see a new generation of Harvard women exploring flexible situations with their partners as they raise children.

“I think the younger women now are braver about saying you can’t have it all at once,” Magruder said. “When there’s a will, there can be new solutions.”