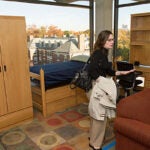 Raise funds for Sandy victims after NYC marathon is canceled

The decision to cancel the ING New York City Marathon didn’t stop Harvard College seniors Samantha Whitmore and Meredith Baker from running their own fundraising marathon on Sunday to raise awareness and funds for victims of the devastation in the tri-state area.

Baker and Whitmore, who two years ago formed a friendship through running, had decided to run the 2012 New York marathon as a symbolic “finish line” to their time at Harvard.

After Hurricane Sandy struck and the marathon was officially canceled, the pair decided a marathon fundraiser would be a more appropriate and meaningful event, especially because both have ties to the area: Whitmore grew up in Manhattan and Baker’s grandparents live in Queens.

Baker said news got out about their plans thanks in part to the Harvard Marathon Challenge club, which spread the word about the run over its email list. A large number of club members started the race with them.

It was midway through the race that Baker and Whitmore learned their fundraising goal of $2,620 had been exceeded. “We ended up raising $4,300,” Baker said. “Given that we came up with the idea so last-minute and only made the fundraising page [Friday evening], we were worried about even reaching $2,620, and we are so grateful to everyone who contributed, both with their money and with their time in show of support and solidarity for those affected by Hurricane Sandy.”

A group of approximately 25 people ran the first loop, about nine miles, which circled the Science Museum. Four people ran the entire race with Whitmore and Baker, including “barefoot runner” and Harvard Professor of Human Evolutionary Biology Daniel Lieberman.

Three of the runners were experienced marathoners, so they offered “mental support and advice,” Baker said, adding that Esther Kennedy ’13 ran her very first marathon at Sunday’s event. Everyone finished together with a time of 3 hours and 51 minutes.

“This was a wonderful day for several reasons,” said Whitmore, “we had so much amazing support from fellow Harvard junior Tyler Cusick and [Undergraduate Council] President Danny Bicknell ’13, as well as other friends and student groups who brought us water and refreshments.”

“It is an incredible reminder of the generosity and sense of community present on campus, and I was incredibly humbled for people to take time out of their day to take part in the marathon,” Baker added.