Halloween on the move 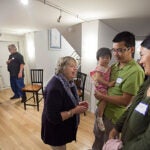 On the steps of the Malkin Athletic Center (MAC), in the quickly darkening gloom on Wednesday, several unusual characters began the terrifying Halloween tradition of … stretching.

Approximately 30 runners gathered for the free Harvard On The Move (HOTM) run, which leaves from the steps of the MAC at 5:15 p.m. Wednesdays.  (Check the website calendar for the full schedule.) But as the evening jog happened to fall on the spooky holiday, some donned costumes for the event. Cleopatra, “HarvardMan,” and even the Dudley House Lion all turned out to run along the Esplanade.

Christine Howard, partner of Dudley Athletics Fellow Seth Peabody, attended her first run with Harvard On The Move as Superperson. “It’s super, it’s empowering, it’s cheap, and it’s made of things I have around my house,” she said, laughing. “What more could you want?”

Similarly, HarvardMan, Joey Wall ’14, said that his costume — resplendent with a crimson pillowcase safety-pinned at the neck as a cape — was born of necessity. “It was 9 p.m. on a Saturday, and I needed a costume,” Wall said. “Improvisation just took hold.”

Adjusting his lion’s head, Peabody readied himself for the race. “I thought it would be a good boost for Dudley House to run with HOTM today,” he said. “My neck is a bit sore, but I think it’ll be worth it.”

Harvard On The Move is a University-wide initiative created to promote physical and psychological wellness though noncompetitive walking and running programs. The program sponsors weekly walks and runs in addition to workshops and lectures highlighting cutting-edge research and practical hands-on information. Harvard On The Move is free and open to students, faculty, staff, and alumni, as well as our neighbors in Cambridge and Boston.