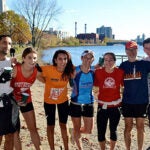 And when members of the Harvard community and their neighbors roll up their sleeves and turn art into awareness, empty bowls can become an effective method of raising money for the hungry and the homeless.

That was the premise of the Empty Bowls open house and dinner held Thursday at the Harvard Allston Education Portal Annex on North Harvard Street. The fundraiser, the third public event in the annex, utilized the talents of Harvard students, artists at Harvard’s Ceramics Program, and other community partners to raise money for the Allston-Brighton Food Pantry and the Harvard Square Homeless Shelter.

“We have never done something like this before,” said Shawn Panepinto, acting director of the Ceramics Program, Office for the Arts at Harvard (OFA). “I was very impressed at how many people volunteered.”

An international grassroots effort to fight hunger, Empty Bowls uses a simple but effective formula. Potters and other craftspeople create handmade bowls. Guests are invited for a meal of soup and other food, and, for a donation, keep the bowl as a reminder of all the empty bowls in the world. The donations go to organizations working to end hunger and food insecurity.

Last year, the OFA ceramics program and Harvard Public Affairs & Communications decided to organize the University’s first Empty Bowls event. For the past year, organizers have worked with members of the Harvard community to make more than 1,000 bowls. The effort included hosting a massive “glaze-a-thon” that brought in people who had never tried their hand at clay before.

More than 200 tickets priced from $10 to $25 were sold for the event. Attendees chose favorites from among the hundreds of finished bowls elegantly displayed in the annex. They sampled pizza, salad, bread, and cookies, all donated by Cadbury Commons, Stone Hearth Pizza, Finale Desserts, Panera Bread, and Oggi Gourmet. Harvard University Dining Services donated soup. Many attendees bought multiple tickets because they couldn’t resist getting more than one bowl, or couldn’t choose a favorite among the multitude of creations. All proceeds will go to the two charities.

Kathi Tighe, who works at the ceramics studio, praised the Empty Bowls event as a way to bring the community together for a cause. “I think it’s a great event. It’s a terrific way to support charities and get people to donate to charity in a way that feels right,” she said as she struggled to balance a stack of pots she was gathering for friends with tickets.

Many of those in the ceramics program who made and donated bowls also bought tickets.

“They’re the biggest supporters of this event,” Panepinto said. They included Darcie Flanigan, who has retired from a post in Law School admissions. She began studying pottery five years ago after an archaeology dig made her curious about clay. In making bowls for the event, she emphasized both functionality and grace.

“We wanted people to come in here and get a sense we were really contributing to the community,” she said. She was thrilled by the turnout. “I have never been to an event with a crowd this enthusiastic and this polite.”

Jack Megan, director of the Office for the Arts, emphasized the ties between the Allston community and the ceramics program, which has been a fixture in the neighborhood since 1987.  The program provides a creative studio and laboratory study environment for Harvard students, staff, and faculty, as well as local and international artists, scholars, and scientists.

“This studio sits at the intersection of many different communities, the Harvard students and faculty, but also the community of artists from Greater Boston, Allston, and beyond,” Megan said.

Currently housed in a single-level warehouse building at 219 Western Ave., the ceramics program will move to 224 Western Ave. as part of Harvard’s 10-year plan for its Allston locations.  The new ground-level studio will offer a new street-side exhibition space and will continue its arts programming.

“Empty Bowls at the Ed Portal Annex is a wonderful idea that builds community among Harvard departments, local nonprofits, and businesses, and Allston and Cambridge neighbors, while promoting the arts and combating hunger and homelessness,” said Maile Takahashi, director of community programming.

“Everyone walked away inspired by the missions of the Harvard Square Homeless Shelter and the Allston Brighton Food Pantry and the care and enthusiasm of the participants of the Harvard ceramics program.  It is exciting to take part in events that support meaningful connections between Harvard and its neighbors and the Harvard arts program that will be part of the growing activity and vitality in Barry’s Corner.”

Harvard senior Charlie Hobbs, administrative director of the Harvard Square Homeless Shelter, said of the event, “It is really exciting to see so many people on the Harvard community come together and support two causes that are really important to people who live in this area.”

The Rev. Karen Fritz, pastor of the Brighton Allston Congregational Church, which hosts the Allston-Brighton Food Pantry, spoke with fervor about the 33-year history of the pantry and the church’s food ministry.

“The image of an empty bowl is such a powerful reminder of all the empty bellies of people around this world,” she said.