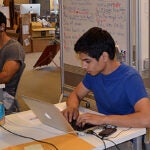 Students who applied by Nov. 1 will be notified on Dec. 13

A total of 4,856 students have applied for admission to Harvard’s Class of 2017 under the Early Action program, an increase of 14.9 percent over last year. The Class of 2016 had 4,228 students in the early pool.

Harvard restored Early Action last year after a four-year absence. A total of 772 students were admitted under the program, with the balance of the 2,076 students admitted through Regular Action.

Under Early Action, students apply by Nov. 1 and are notified by Dec. 13.  Students admitted under Early Action are not obligated to attend and have until May 1 to reply.

This fall, students affected by Hurricane Sandy were given extensions to the deadlines for their applications, recommendations, and testing requirements. This long-standing practice of flexibility for students facing hardships of all kinds enabled some students to overcome a variety of challenges related to the storm.

Families with annual incomes of $65,000 or less are not required to contribute to their children’s educational expenses. Those with incomes from $65,000 to $150,000 pay on a sliding scale up to 10 percent of annual income, and there is also need-based aid available to families with incomes greater than $150,000. Families with significant wealth in all income categories are asked to contribute more. Home equity and retirement funds are not considered in the calculations, and students are no longer required to take out loans. More than 60 percent of Harvard students receive need-based financial aid and receive grants averaging more than $40,000.

“Other factors may also have played a role in having more students consider Harvard,” said Fitzsimmons. “The new Innovation Lab, the Harvard Initiative for Learning and Teaching, and edX, launched this past spring with MIT, have been noted by students we have met recruiting on the road this fall.”