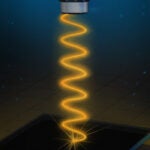 Researchers at the Wyss Institute for Biologically Inspired Engineering at Harvard University have created more than 100 3-D nanostructures using DNA building blocks that function like Lego bricks — a major advance from the two-dimensional structures the same team built a few months ago.

In effect, the advance means researchers went from being able to build a flat wall of Legos to building a house. The new method, featured as a cover research article in the Nov. 30 issue of Science, is the next step toward using DNA nanotechnologies for more sophisticated applications than ever possible before, such as “smart” medical devices that target drugs selectively to disease sites, programmable imaging probes, templates for precisely arranging inorganic materials in the manufacturing of next generation computer circuits, and more.

The nanofabrication technique, called “DNA-brick self-assembly,” uses short, synthetic strands of DNA that work like interlocking Lego bricks.  It capitalizes on the ability to program DNA to form into predesigned shapes thanks to the underlying “recipe” of DNA base pairs: A (adenosine) only binds to T (thymine), and C (cytosine) only binds to G (guanine).

Earlier this year, the Wyss team reported in Nature how they could create a collection of two-dimensional shapes by stacking one DNA brick (42 bases in length) upon another.

But there’s a “twist” in the new method required to build in 3-D.

The trick is to start with an even smaller DNA brick (32 bases in length), which changes the orientation of every matched-up pair of bricks to a 90-degree angle — giving every two Legos a 3-D shape. In this way, the team can use these bricks to build “out” in addition to “up,” and eventually form 3-D structures, such as a 25-nanometer solid cube containing hundreds of bricks. The cube becomes a “master” DNA “molecular canvas”; in this case, the canvas was composed of 1,000 “voxels,” which correspond to eight base-pairs and measure about 2.5 nanometers in size — meaning this is architecture at its tiniest.

The master canvas is where the modularity comes in: By simply selecting subsets of specific DNA bricks from the large cubic structure, the team built 102 3-D structures with sophisticated surface features, as well as intricate interior cavities and tunnels.

“This is a simple, versatile, and robust method,” says Peng Yin, Wyss core faculty member and senior author on the study.

Another method used to build 3-D structures, called DNA origami, is tougher to use to build complex shapes, Yin said, because it relies on a long “scaffold” strand of DNA that folds to interact with hundreds of shorter “staple” strands — and each new shape requires a new scaffold routing strategy and hence new staples. In contrast, the DNA brick method does not use any scaffold strand and therefore has a modular architecture; each brick can be added or removed independently.

“We are moving at lightning speed in our ability to devise ever more powerful ways to use biocompatible DNA molecules as structural building blocks for nanotechnology, which could have great value for medicine as well as nonmedical applications,” says Wyss Institute Director Donald Ingber.

The research was supported by the Office of Naval Research, the Army Research Office, the National Science Foundation, the National Institutes of Health, and the Wyss Institute for Biologically Inspired Engineering at Harvard University.