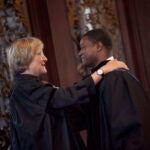 If a neighborhood could talk, what would it tell you about its citizens, its resources?

A lot, it turns out, as the newly launched website of the Boston Area Research Initiative (BARI) makes clear. By offering aggregated datasets and mapping tools, the site is a platform and a network through which to share information about Boston’s people, places, and events.

BARI, an inter-university research partnership led by Harvard’s Radcliffe Institute for Advanced Study with the Rappaport Institute for Greater Boston and the city of Boston, held “Teaching Boston,” a workshop that introduced an array of Web tools and data to a packed room at Boston City Hall on Friday. The nearly 60 participants included city officials, representatives from local nonprofits, and 35 faculty members from eight area universities who are all teaching courses about Boston.

This was an unprecedented collaborative endeavor for Boston and the people who teach about the city, noted Bill Oates, chief information officer for the city of Boston, in his opening remarks.

Robert J. Sampson, director of BARI and of the social sciences program at the Radcliffe Institute, shared his vision for BARI: that the researchers gathered on Friday at City Hall will add new layers of sources and data, further enriching what’s available to the city and to researchers.

“We believe that there’s great opportunity in the city to spur original research,” said Sampson, the Henry Ford II Professor of Social Sciences at Harvard. “But the amount of energy being focused on Boston is perhaps not living up to its potential.” For Sampson, this means information that goes beyond demographics: giving a taste, for example, of a neighborhood’s arts resources.

But this information isn’t valuable only to area researchers, but to city officials, as well. “Boston is a laboratory for students and academics,” said Boston Mayor Thomas M. Menino, in a prepared statement. “The city provides an ideal location for fieldwork on urban life issues. By connecting with area academic institutions, we can take the good ideas being developed in the classroom and put them into good use in the city.” BARI is dedicated to connecting scholars with policymakers, practitioners, and civic leaders, he added.

Barbara Berke, a senior policy adviser to the mayor, drove this point home at the workshop. “We have never had the kind of assets that we have in this room today to ask how we make Boston a city that learns faster about itself than any other city,” she said. She then encouraged “Teaching Boston” participants to share ways in which BARI tools, such as MetroBoston Data Common and the Boston Redevelopment Authority’s myNeighborhood Census Viewer, could result in more concrete collaboration between academics and policymakers or nonprofits.

A short discussion period yielded a number of ideas, including harnessing the young talent in the area, whether by structuring student work to help solve city concerns, awarding prizes to the best student papers on urban issues, or holding intensive brainstorming sessions similar to “hackathons” to tackle specific projects.

“With its long history, Boston offers a unique opportunity to understand the past, present, and future of cities and the challenges they face,” said Radcliffe Institute Dean Lizabeth Cohen, who is a 20th-century urban historian at Harvard. “We are very grateful to our partner in this project, the city of Boston, for giving students, faculty, and other researchers remarkable access to data that will improve teaching about urban life as well as the livability of cities for their citizens.”

As the event drew to a close, Christopher Winship, BARI co-director, marveled at the power and potential of BARI. The only initiative of its kind, BARI positions Boston at the forefront of city-university — and of inter-university — research and collaboration, said Winship, the Diker-Tishman Professor of Sociology and a member of the faculty of the Harvard Kennedy School.