When it’s best to do nothing at all 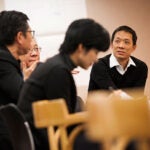 Harvard study finds a story of survival in blown-down forests

In newscasts following intense wind and ice storms, damaged trees stand out: snapped limbs, uprooted trunks, sometimes entire forests blown nearly flat. In the storm’s wake, landowners, municipalities, and state agencies are faced with important financial and environmental decisions. A new study by Harvard University researchers, soon to be published in the journal Ecology, yields a surprising result for large woodlands: When it comes to the health of forests, native plants, and wildlife, the best management decision may be to do nothing.

Salvage logging is a common response to modern storm events in large woodlands. Acres of downed, leaning, and broken trees are cut and hauled away. Landowners and towns financially recoup with a sale of the damaged timber. Salvage logging was widespread in southern New England following the June 2011 tornadoes and the October 2011 snowstorm, and the practice was well documented after the great hurricane of September 1938.

In a salvaged woodland landscape, the forest’s original growth and biodiversity, on which many animals and ecological processes depend, is stripped away. A thickly growing, early successional forest made up of a few light-loving tree species develops in its place.

But what happens when wind-thrown forests are left to their own devices? The Ecology paper reports on a study initiated in 1990 at the Harvard Forest, in which a team of scientists re-created the impacts of the 1938 hurricane in a two-acre patch of mature oak forest. Eighty percent of the trees were flattened with a large winch and cable. Half of the trees died within three years, but the scientists left the dead and damaged wood on the ground. In the 20 years since, they’ve monitored everything from soil chemistry to the density of leaves on the trees. What they’ve found is a remarkable story of recovery.

According to David Foster, director of the Harvard Forest and co-author of the new study, “Leaving a damaged forest intact means the original conditions recover more readily. Forests have been recovering from natural processes like windstorms, fire, and ice for millions of years.  What appears to us as devastation is actually, to a forest, a quite natural and important state of affairs.”

Initially, the Harvard site — just like tornado-ravaged areas of Massachusetts’ Brimfield State Forest and the McKinstry Brook Wildlife Management Area in Southbridge, Mass. — was a nearly impassable jumble of downed trees. But surviving, sprouting trees, along with many new seedlings of black birch and red maple — species original to that forest — thrived amid the dead wood. Audrey Barker Plotkin, lead author of the study, explains, “I was surprised at how strongly surviving trees and seedlings from the original forest came to dominate.”  Although weedy invasive plants initially tried to colonize the area, few persisted for long.

Following the June 2011 tornadoes, the Massachusetts’ Division of Fisheries and Wildlife pursued this controversial watch-and-wait policy at the McKinstry Brook site, where salvage work is limited to providing access routes for public safety. John Scanlon, forestry project leader at the Division of Fisheries and Wildlife, explains, “As a wildlife agency we made the decision not to salvage the tornado impact area at McKinstry Brook because we saw tremendous potential wildlife habitat benefits in the extensive woody debris, open conditions, and vibrant vegetative response.”

Just a year later, the forest’s resilience is plain. According to Scanlon, “We were impressed at how quickly the impact area was occupied by lush, native vegetation, including sprouts or seedlings of American chestnut, red maple, black cherry, birch, aspen, and oak. And most people don’t realize that our pre-colonial forests contained a lot of downed woody debris that provides important habitat structure for wildlife. It supports everything from invertebrates to salamanders, and black bears love to winter in thick brush piles and forage for insects in rotting logs.” Game species benefit as well. “White-tailed deer readily foraged and sought protective cover throughout the impact area,” Scanlon reports.

The Harvard Forest scientists point out that windstorms do have undeniable impacts on forests, regardless of human management strategies. Barker Plotkin notes, “After 20 years, the trees in the hurricane experiment are younger and smaller than those in the surrounding forest, and birches are now more common than oaks, which used to dominate here.” But she adds that many aspects of the regenerating forest – particularly in the soils and forest understory — are almost indistinguishable from their neighbors.

Although a range of economic, public safety, and aesthetic reasons compel landowners to salvage storm-damaged trees, Barker Plotkin suggests that improving forest health should not be one of them. “Although a blown-down forest appears chaotic, it is functioning as a forest and doesn’t need us to clean it up.”