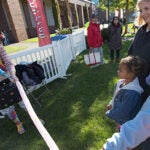 A celebration of community

The contract between Harvard University and its largest union, the Harvard Union of Clerical and Technical Workers (HUCTW), expired on June 30. While work on a contract has continued, the talks have shown no sign of nearing an end. The Gazette spoke with Marilyn Hausammann, vice president for human resources, and Bill Murphy, the director of labor relations, about the state of the negotiations.

GAZETTE: Where do the talks stand right now?

MURPHY: We’re continuing to negotiate. Since expiration of the agreement, we have met on numerous occasions, sometimes with the assistance of a mediator.

GAZETTE: Could you elaborate on the kind of activity taking place during negotiations?

GAZETTE: Last week, Marilyn, you sent a letter to senior managers across the University that included many details of the University’s initial offer. Why did you decide that now was the time to share that information?

HAUSAMMANN: It’s been more than three months since the expiration of the contract, and a lot of managers have been fielding questions about the status of the negotiations from members of the union, and wanted some sense of what was happening from the University’s perspective. We’ve also heard directly from many union members, a dialogue that is important and that we appreciate. So we felt that it was time to reach out and share our perspective more broadly.

MURPHY: I’d also add that it’s not unusual at different points in a negotiation — especially one that’s gone on for so long — to start informing your managers and your senior leadership about the issues being discussed at the negotiating table.

GAZETTE:  How would you characterize the University’s offer right now?

MURPHY: Our wage offer is very competitive and fair to employees who are represented by the union and to employees across the University as a whole. It’s consistent with what the rest of the Harvard University workforce has received. It’s also competitive with any peer institutions that we’ve looked at.

GAZETTE: What would this offer mean for the average HUCTW worker?

MURPHY: In the aggregate, the contract would represent a 2.8 percent wage increase for HUCTW workers in the first year of the contract alone. That is on par with agreements we’ve reached with seven of our other unions over the past year and a half. Moreover, any employee with a year of service making below $50,000 a year would see a wage increase of around 3 percent in the first year because of the progressive structure of our wage agreements with the HUCTW. That’s very competitive and exceeds inflation.

GAZETTE: That’s wages. How about benefits?

HAUSAMMANN: The changes we have proposed to the active health plans are what I would describe as relatively modest changes to co-pays along with changes in the deductible and out-of-pocket maximums for out-of-network coverage. That’s an important point, since our networks are very broad. More specifically, we’ve proposed an increase in the co-pay for office visits from $15 to $20. Small increases to pharmacy co-pays were also made. These changes took effect for the vast majority of the people in the University on Jan. 1, and they are consistent, if not more generous, than what we see in the marketplace.

GAZETTE: Are you proposing any other changes in health coverage?

MURPHY: No, we are not changing the benefit itself. It’s really essentially looking at curbing growth in the cost of care, which, you know, all employers are struggling with. Our benefits still rank in the top 25 percent, so we think it’s a fair and reasonable offer.

GAZETTE: How does HUCTW compensation currently compare with both the internal and external job markets?

HAUSAMMANN: It compares very favorably. We mentioned that compensation is on average at the 75th percentile. That is on a par with organizations that typically are awarded “best employer” status.

MURPHY:  The University is proud of its progressive approach to health care. For example, HUCTW members have access to a co-pay reimbursement program that’s unrivaled by our peers.  Also, with Harvard paying such a large share of the health insurance premium — as much as 85 percent for people making less than $70,000 — that’s progressive. Having a tiered system based on employee salary levels puts us in the minority of employers.

HAUSAMMANN: Like all employers, our compensation is based on the value of the job in the marketplace. The offer we have on the table for HUCTW members compares very favorably to the marketplace. I would also observe that we do find ourselves in constrained financial circumstances. The endowment is still 20 percent below what it was before the global economic downturn, and we anticipate severe constraint on virtually every source of revenue to the University in the years ahead. But even given these constrained financial circumstances, we’ve put forward what I would describe as a very fair, very strong offer.

MURPHY: We have a whole array of traditional and work-life benefits that are different than a lot of employers. We’ve instituted policies over the years that greatly benefit our employees in a number of ways that go beyond just wages.

MURPHY: Well, tuition assistance, child-care scholarships, adoption assistance. We have transportation funds, help for people with low-interest loans, sometimes no-interest, through the credit union for HUCTW members. Work security benefits for layoffs that are very generous. So there are a number of different programs, all of which cost money, and our investments in our workforce go beyond what we pay people in terms of wages.

GAZETTE: Let’s go back to health care for a moment.

HAUSAMMANN: We have made changes to health care in recent years. The changes we’ve made carefully considered the impact on our people. That’s why we first focused on administrative changes like self-insurance and consolidating our health care providers. Changes like these saved a lot of money, and were intended to reduce the impact felt by faculty and staff. The changes we’re making to premiums this year are done in such a way to minimize the effect on employees earning less than $70,000 per year. All of that says to me that we’ve worked hard to make great health care available in an affordable way.

GAZETTE: OK, but still — look at all of the initiatives announced recently. There are construction cranes working all around campus. EdX and renovating the College residential Houses. Isn’t that evidence that the University’s finances are fully back? Why aren’t we talking about something that’s ahead of the curve in terms of compensation for this contract?

HAUSAMMANN: It’s important to point out that we have committed to raising money to cover initiatives such as edX. Our investments are a sign of our priorities. The projects that you hear about help advance our educational mission. That isn’t to take away from our staff — we offer very competitive pay, very competitive benefits, and we’ve made an extremely strong offer to the union when you consider the market. We always need to ask ourselves how we will preserve this institution for future generations. This isn’t just about the initiatives that you cite: the building projects, edX, or whatever. Carefully stewarding our resources is a way to help people build careers, offer competitive compensation, and strengthen the Harvard community for the long term.

MURPHY: There’s certainly no danger of this particular segment of our workforce falling behind in the wage market with our proposal, which more than keeps pace with inflation. But it’s important to note we’re not pointing to the current economic climate and making an argument to reduce or suppress wages. What we’re offering is competitive, no matter how you look at it. You can look at it internally, you can look at it externally, you can compare it to inflation. However you want to look at it, it’s a competitive offer. And we know other unions have accepted the same type of proposal and considered it to be fair.

GAZETTE: What’s your prognosis for the talks at this point?

MURPHY: We’ll continue to work at it. We’re going to continue to exchange ideas on both benefits and wages. Those are the two biggest issues.

HAUSAMMANN: I think that there is confidence in our long-standing, positive relationship with the union. I think we should be optimistic.