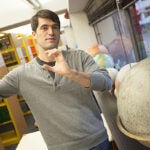 Although it was identified as a disorder as early as the 14th century, pica, or the eating of nonfood items, was believed for years to be almost nonexistent in several corners of the globe. A 2006 study that reviewed research on pica found just four areas — southern South America, Japan, Korea, and Madagascar — where the behavior was not observed.

A new Harvard study, however, shows that pica — and particularly geophagy, or the eating of soil or clay — is far more prevalent in Madagascar, and may be more prevalent worldwide, than researchers had thought.

As described in an Oct. 17 paper published in PLoS ONE, Christopher Golden ’05, a postdoctoral fellow at the Harvard University Center for the Environment, and colleagues from Madagascar Health and Environmental Research, the Université d’Antananarivo, and Cornell University surveyed 760 people living in 16 villages in the northeastern corner of the island nation, and found that more than half had engaged in geophagy.

“We found the practice, though somewhat concealed, is incredibly widespread in Madagascar,” Golden said. “Perhaps even more interesting, our findings suggest that the population that is engaging in this behavior doesn’t fit with the traditional characterization of pica.”

In earlier studies, researchers found that nearly all cases of pica occurred in adolescents or pregnant women — periods of increased nutritional demands. As expected, Golden and colleagues found high rates of both pica and geophagy among women in Madagascar, but they were surprised to uncover equally high rates among men, and even observed cases of children as young as 5 engaging in the behavior.

“We found no significant difference between men and women,” Golden said. “That suggests that sex is unimportant to the behavior, and that’s never been shown before. To be fair, it may simply be that the behavior hasn’t been studied in men because earlier studies had focused on pregnant women. But it also suggests that we should be asking questions about both sexes and across all ages to fully understand the motivations for this behavior.”

One explanation for the seemingly high rate of the behavior, Golden said, is that soil is a key component of a natural medicine called aody andro, used by many Malagasy people as a “good luck” medicine to avoid becoming sick.

“It doesn’t fit into the strict definition of pica, because it’s not a craving. They’re using it to self-medicate,” Golden said. “But that could account for part of the reason the practice seems to be so widespread.”

While the study doesn’t speculate as to why people in Madagascar engage in pica or geophagy — the two most popular theories suggest that people are absorbing nutrients like iron, zinc, and magnesium from the soil, or that the soil acts as a natural de-worming treatment — Golden said he hopes to answer those questions through additional research.

“These questions fall under the larger umbrella of what I’m interested in exploring, which is environmental resource use and human health,” he said. “It would be interesting to see if the soils are imparting any nutritional benefits.

“But additionally, this research is interesting because it begs for further analysis of other areas of the world,” he added. “It could be that Madagascar is a very unique case because men engage in this behavior as widely as women. But it could also be that the earlier methods we used to research this slanted the results in a particular way because of the way researchers approached the subject.”