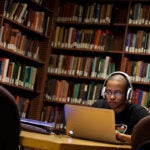 Faust speaks at Boston College as it celebrates its 150th year

Harvard neighbor Boston College (BC) celebrates its 150th anniversary this year, providing an opportune time for the Jesuit institution to reflect on the enduring, necessary struggle between scholarship for social good and inquiry for its own sake, President Drew Faust said on Wednesday.

“At their best, universities maintain a creative tension, tackling the purposeful and the apparently pointless with equal delight,” she told a crowd of trustees, faculty, alumni, and friends in BC’s Robsham Theater. Harvard and BC must keep sight of that goal “in a world where the measure of things so often trumps the meaning of things, and the practical, immediate uses of knowledge so often overshadow the larger, more enduring purposes of education.”

Faust had crossed the Charles River to the Heights to kick off the college’s Sesquicentennial Speaker Series and to receive the first of three Sesquicentennial Medals that BC will award this year in celebration of its milestone.

She spoke following the college’s celebratory Mass for 20,000 guests at Fenway Park — “a hard act to follow,” she said.

Faust was honored for her leadership in higher education and for her Civil War scholarship, work that “has illuminated events of the past, enhancing our understanding of the present,” said Kathleen M. McGillycuddy, chair of BC’s board of trustees, as BC President William P. Leahy presented Faust with her award.

Faust echoed that aim in her lecture, calling for a broad effort among institutions of higher education to look beyond the “myopic present” and address questions of how to live and how to shape a better future for civilization.

“Certainly, our budgets must balance, our operations must be efficient — but we are not about the bottom line, not about just the next quarter, not even about who our graduates are the day they leave our walls,” she said. “Our task is to illuminate the past and shape the future, to define human aspirations for the long term.”

Her message wasn’t so different from the call-to-arms that Harvard President Nathan M. Pusey delivered to the BC community 50 years ago for its centennial, when he lamented that the two schools’ “common task … does not get easier with the passing centuries.” Indeed, the debate over both who and what higher learning is for extends back to BC’s founding during the Civil War, Faust said.

Then, as now, Americans were pursuing higher education in unprecedented numbers. As college leaders dealt with this new demand, they struggled to integrate a newfound research agenda with a traditional model of education that aimed to cultivate character.

“In what was widely seen to be an increasingly materialistic age, the affirmation of the transcendent purposes of learning came to seem imperative,” Faust said, citing leading Catholic thinker Cardinal John Henry Newman’s characterization of the struggle between “useful knowledge” and “liberal knowledge.”

“In Boston, the argument played out between Boston College and Harvard, in a battle of words whose fierceness would have done the Beanpot rivalry proud,” she added to laughter, mentioning Boston’s annual hockey tournament.

Today, as a college degree becomes an ever-more-necessary credential for success — and as universities continue to play a central role in producing cutting-edge research — leaders must not lose sight of the aim of learning and teaching for its own sake, Faust said.

“The scholarship that has served as the beating heart of the research university is exploration based on curiosity,” she said. “Without such scholarship, without zones of contemplation, with only prescribed purposes and goals, we will underemphasize the questions that most concern us, our lives, our mysteries.”

As the decades have passed, BC’s founding principle — “that an education is not just about knowledge, but also about how to live a life” — seems more relevant than ever, Faust concluded.

“Yours is a great university, an institution that in a century and a half has never lost sight of its larger purposes,” Faust said. “It is a privilege to celebrate with you that singular achievement and to honor the Jesuit commitment to scholarship, justice, and service. They are all needed today just as urgently as they were 150 years ago.”