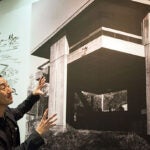 Poet David Ferry had just finished his English translation of “The Epic of Gilgamesh” in 1993 when he walked into the studio of sculptor and Harvard Professor Dimitri Hadzi. A stone sculpture there caught Ferry’s eye, and he asked Hadzi if he could use an image of it on his upcoming book cover.

Hadzi said yes and went a step further, naming the abstract sculpture “Gilgamesh,” after the ancient king of Uruk, tested by the gods in a search for immortality.

Cynthia Hadzi said the statue was a favorite of her husband, who died in 2006. Another favorite of his was Harvard’s Mineralogical and Geological Museum, which he visited regularly for meetings of the Boston Mineralogical Club. So it made sense to her to bring the two together.

“We’d always held onto it as a favorite of his,” she said of the statue. “I felt it needed to be seen by more people.”

Now “Gilgamesh” stands just outside the Mineralogical and Geological Museum’s doorway, in the courtyard between the museum and the Tozzer Library.

Hadzi was a renowned sculptor as well as a professor in Harvard’s Visual and Environmental Studies Department. He worked mostly in bronze, though not exclusively. Examples of his work stand in museums and public spaces around the world. Locally, there is “Omphalos,” in gray and red granite, in Harvard Square, and “Thermopylae,” in bronze, outside the John F. Kennedy Federal Building in Boston.

In addition to “Gilgamesh,” which was dedicated at a ceremony Sept. 13, Cynthia Hadzi also donated several samples of stone specimens from around the world that her husband had planned to use for sculptures and that had been stored at the studio.

Mineralogical and Geological Museum Director Charles Langmuir said it was appropriate for the museum to have a sculpture at its doors that was not only made of stone but that also represents trials on the path to self-knowledge suffered by Gilgamesh, hero of the Sumerian epic that is one of the earliest literary works.

“Cynthia made the generous offer of allowing this beautiful sculpture to be placed near the museum,” Langmuir said. “I love the idea because Gilgamesh is the most ancient of tales about a wonderful hero and the trials he goes through on the path to self-knowledge. To have that image done in beautiful stone is very appropriate for Harvard and also for its location near the museum.”