The early days of discovery 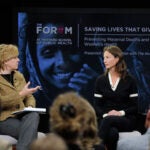 As young researcher, Nobel winner in chemistry worked at Harvard

A recipient of this year’s Nobel Prize in chemistry investigated the workings of cell receptors, the basis of his lengthy, groundbreaking research involving the complex processes of how the body’s cells communicate and interact, while he was a young medical resident at Harvard.

From 1970 to 1973, Robert Lefkowitz, now an investigator at the Howard Hughes Medical Institute, completed his medical residency and clinical training in cardiovascular disease at Harvard-affiliated Massachusetts General Hospital (MGH) and served as a teaching fellow at Harvard Medical School (HMS).

While at Harvard, Lefkowitz conducted some of his earliest research into the heart’s adrenergic receptors while working in the laboratories of Edgar Haber, an immunochemist, HMS professor of medicine, and chief of the cardiac unit at MGH. (Haber went on to become the Blout Professor of Biological Sciences at the Harvard School of Public Health and director of its Division of Biological Sciences.)

Lefkowitz and Brian Kobilka of Stanford University won the Nobel in chemistry today for their years of work on G-protein-coupled receptors that enable cells to sense their environments and respond to external stimuli. A cell’s ability to detect factors such as light, sound, and about half of all medications directly depends on such receptors embedded in its membranes. Authorities agree that their research has wide-ranging implications for developing better drugs.

Their work involves the use of radioactivity to help identify cells’ receptors, including adrenaline receptors, the isolation of a receptor gene, and the observation of receptors binding to molecules.

Lefkowitz finished first in his class at Columbia University in 1962. He graduated from the Columbia College of Physicians and Surgeons in 1966 with an M.D. degree.

The pair will share the prize of 8 million Swedish kronor, or about $1.2 million.