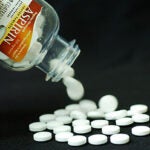 Dogs in all their amazing variety — tall or short, pug-nosed or snouted, curly haired or straight, mastiff or teacup — are the same species, Elaine Ostrander reminded the audience, standing before an almost comical image of a giant harlequin Great Dane and a tiny Chihuahua.

Being the same species means that even breeds at opposite ends of the size spectrum can breed, as unlikely as that may seem from a practical standpoint. It also means they share the same genetic code, except for the part responsible for breed traits. That makes those genes stand out and makes dogs ideal subjects for genetic studies, Ostrander said.

Ostrander, who runs a comparative genetics laboratory at the National Institutes of Health’s (NIH) National Human Genome Research Institute, described her lab’s work during a lunchtime seminar on Thursday in the Northwest Laboratory, sponsored by the Department of Molecular and Cellular Biology. Over the past several years, Ostrander’s lab has made some landmark findings, including tracking dog size to a single gene, finding three genes for coat variation, and discovering a mutation for the short-legged characteristic of corgis, dachshunds, and similar breeds.

In the genes of dogs, researchers not only learn more about specific breed traits, they also gain insight into similar human traits that might be related to disease.

For example, research led by Heidi Parker in Ostrander’s lab searched for the genes responsible for the short-legged, big-boned breeds like corgis, which have an analogue in human asymmetrical dwarfism. Researchers examining dog skull characteristics to understand the genetic basis for differences between pug-nosed breeds like boxers and long-nosed breeds like Afghan hounds found a gene that might be applicable in human cases of frontal bossy, where the forehead is prominent and rounded; hypertelorism, where the eyes are spaced abnormally far apart; and short philtrum, where the distance between the upper lip and the nose is abnormally small.

Ostrander’s work has been greatly aided by the cooperation of the many breed associations in the United States and around the world, which helped to stock her freezer with 13,000 small DNA samples from registered dogs.

There are 300 breeds recognized worldwide, each of which resulted from careful mating to emphasize specific characteristics. Ostrander said her research actually began as a search for the genes responsible for breed-specific behaviors, but that has proven very difficult to nail down. Physical traits, however, have proven easier to track through DNA.

In research on a disease that strikes standard poodles — but only those with black coats — researchers found that a susceptibility to squamous cell cancer of the nailbed was associated with a gene involved in pigmentation. It was the first case identified where breeders have specifically selected a disease gene in order to get a particular morphological trait, Ostrander said.

Ostrander uses a technique called genomewide association studies, in which the entire genome is scanned looking for genes that are turned on and off. By comparing the profiles of many individuals of different breeds, researchers can zoom in on likely candidate genes turned on in one breed but not in another that doesn’t share the trait. With dogs having been bred for specific traits for hundreds of years, the signal is sometimes far stronger than can be found using similar techniques in humans.

In some cases, like the work on pug-nosed dogs, researchers take the research a step further and confirm their candidate gene through genetic studies with another lab animal. For instance, they turned off the candidate gene in zebrafish, a common laboratory animal used in developmental studies.

“We sort of made ourselves little pug-nosed zebrafish,” Ostrander said.