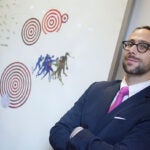 Scientists have long believed that the moon formed as a result of a collision between the early Earth and a smaller planet, but computer models of the giant impact have always predicted the wrong composition for the moon. Now, researchers at Harvard University and the SETI Institute are proposing a new spin on the giant-impact model to match the observed composition of the moon.

The previous giant-impact models held that a small planet, Theia, hit the Earth, sending a cloud of debris from Theia into orbit that formed the moon. But the chemistry of the moon matches that of the Earth. Now, Sarah T. Stewart, a professor in Harvard’s Department of Earth and Planetary Sciences, and her SETI colleague Matija Ćuk propose a new model in which pieces of the Earth broke off and formed the moon.

The researchers present a dynamic model of their theory, based on the results of chemical analyses of isotopes from the Earth and moon, in a paper published online today in the journal Science. The results are also being presented this week at the 44th meeting of the American Astronomical Society (AAS) Division for Planetary Sciences in Reno, Nev.

Additionally, Stewart and Ćuk propose that prior to the collision and creation of the moon, the Earth was spinning much faster than it does now, and had a day that was only two to three hours long.

Many scientists believe that Earth itself emerged from a series of giant impacts. These impacts would have made the early Earth spin near its stability limit of about two hours per revolution. The last giant impact, they believe, formed a moon that is a twin of the Earth. Stewart and Ćuk posit that when the giant impact occurred between Theia and the fast-spinning Earth, the high speed of the Earth’s spin caused the ejection of material from Earth into orbit. They believe that the ejected material formed a moon with chemical composition similar to Earth. After the impact, the rapidly rotating Earth was slowed down by the gravitational interaction between the sun and the moon.

As part of their dynamic model, Ćuk and Stewart found that a resonance between Earth’s orbit around the sun and the moon’s orbit around Earth can pass angular momentum to the sun. Furthermore, Ćuk and Stewart showed that if the Earth was fast-spinning before the impact, then a giant collision could eject enough Earth material into orbit to make the moon.

Today, tides between the Earth and moon both slow Earth’s rotation and push the moon’s orbit further away. But the total angular momentum of the system is conserved. The finding is significant because without a fast-spinning Earth preceding impact, “a giant impact could not make the moon originate from the Earth’s mantle with today’s angular momentum,” said Stewart.

The origin of the moon had been called into question by isotope analyses of material from Earth and the moon. The isotope signatures of celestial bodies differ greatly and often are used to “fingerprint” different planets and meteorite groups. The data show that the Earth and moon are isotopic twins, a contradiction to the moon-origin story from the original giant-impact model. If the original model were correct, then the moon should have had a different isotopic fingerprint from the Earth.

Nineteenth-century scientists speculated about a fast-spinning early Earth. George H. Darwin, son of biologist Charles Darwin, studied the relationship between tides and the moon. In 1879, he suggested that the moon formed by fission from the Earth, but he did not know how early Earth might have being spinning so quickly.

A similar dynamic model for a great impact, resulting in the formation of the moon from Earth material, is described in a second paper in the same issue of Science. This alternative dynamic model is presented by Robin Canup of the Southwest Research Institute (SwRI).

Stewart and Ćuk’s work was funded by NASA’s Origins of Solar Systems program and used the Odyssey cluster supported by the Harvard Faculty of Arts and Sciences (FAS) Research Computing Group.

Harvard writer B. D. Colen and correspondent Jacqueline Sly contributed to this report.