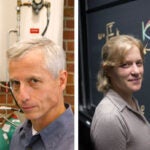 Roth, the George Gund Professor of Economics and Business Administration at Harvard Business School (HBS) and in the Economics Department at Harvard’s Faculty of Arts and Sciences (FAS), received the prize Monday for his work on the design and functioning of such markets, which was done in large part at Harvard. He shares the prize, officially named the Sveriges Riksbank Prize in Economic Sciences in Memory of Alfred Nobel, with Lloyd S. Shapley, A.B. ’44, of the University of California, Los Angeles.

Roth built on Shapley’s theories about the best ways to match “agents” in markets — for example, students matched with schools or organ donors with patients needing organs — and conducted experiments to further illuminate Shapley’s work. He also helped to redesign existing institutions to improve their functioning.

Roth, who called the news of his award “unimaginable,” was quick to direct praise to Shapley when the Nobel committee reached him by phone early in the morning.

“It certainly is expected that Lloyd Shapley should win the prize,” Roth said during the Stockholm press conference. “I’m glad to share it with him.”

“I was sleeping,” he said of the 4 a.m. wake-up call. When asked how he planned to celebrate, the sleepy Roth simply responded, “Coffee.”

Roth received the news in California, where he is a visiting professor at Stanford University. He becomes a professor emeritus at Harvard in January, and joins the Stanford faculty.

In an interview, Roth emphasized the importance of his years in Cambridge, where he launched most of the major real-world initiatives based on his longtime research in market design.

“One of the very special things at Harvard is how wonderful the students are,” he said. “One of the attractions to me in coming to Stanford is many of my colleagues [here] were my Harvard students. I’m now a colleague of my students, which is a special thing.”

Roth came to Harvard in 1998 from the University of Pittsburgh, where he had already established a reputation in experimental economics. That same year marked the debut of Roth’s biggest market-design experiment to date: a redesign of the National Resident Matching Program to improve placements for couples seeking medical residencies in the same city.

At Harvard, Roth tackled the issue of school choice, applying matching algorithms to public school selection in Boston, New York, Chicago, and other cities. In Boston, for example, families once had to play the odds when ranking their school preferences, knowing that if they didn’t get their first choice, their second- and third-choice schools would likely already be full. Roth’s system eliminated the need for that gamesmanship, allowing parents to list their true preferences.

“That levels the playing field,” Roth explained at the press conference in Palo Alto. “It makes it easier for all sorts of families to participate properly.”

Though the problem of limited spots in good schools “doesn’t go away because we allocate scarce places more intelligently … assigning them efficiently and using the reliable information that parents give us about where they want their children to go is something we can do,” he said.

In recent years, Roth has turned his attention to kidney donation matches, helping to establish the New England Program for Kidney Exchange, which pairs donors who are not a match for their intended recipient — say, a family member or friend — with other patients who also have a mismatched donor. (He is also working on a national registry.) The large-scale barter system is intended to improve efficient matches for the 90,000 people nationwide on the waiting list for a donor kidney.

Roth’s work has had broad implications in his field, said Eric Maskin, Adams University Professor at Harvard and a 2007 recipient of the Nobel in economics for his work in mechanism design, the broader field into which market design falls.

“There are many situations in economic life that entail matching up agents — buyers and sellers, donors and recipients, schools and students,” Maskin said. “Whether or not you want to become an engineer and set up a matching process yourself, which is something Al Roth did, you want to understand the range of possible ways that the matching could be done.

“The applications are specific and important and quite intricate, but the subject of matching is also of great theoretical interest,” he added.

Maskin, who has known Roth for decades, emailed his friend early in the day to offer a few words of advice, one Nobel laureate to another.

“I told him that today in particular is going to be really exhausting, and to try to sit down as much as he can,” Maskin said.

With Roth’s award, 45 current and former Harvard faculty members have been recipients of Nobel Prizes for their wide-ranging work, including the tissue culture breakthrough that led to creation of the polio vaccine, negotiations that led to an armistice in the 1948 Arab-Israeli War, the first description of the structure of DNA, the pioneering procedures for organ transplants, the development of Gross National Product as a measure of national economic change, poetry, and much more.

In 2009, Jack Szostak, a genetics professor at Harvard Medical School and Harvard-affiliated Massachusetts General Hospital, won the Nobel Prize in physiology or medicine. Szostak’s work not only revealed a key cellular function, but also illuminated processes involved in disease and aging.

In 2005, physicist Roy Glauber won for his work on the nature and behavior of light, and Thomas Schelling won in economics for work on conflict and cooperation in game theory. Previous winners in the past decade include Linda Buck in physiology or medicine in 2004, Riccardo Giacconi in physics in 2002, and A. Michael Spence in economics in 2001.

The Royal Swedish Academy of Sciences, which selects the winners, said Roth and Shapley will split the $1.2 million that accompanies the prize.