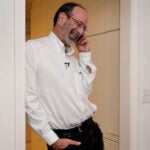 “A great tree has fallen” remarked one of his colleagues upon the death of Robert Vivian Pound, Mallinckrodt Professor of Physics, Emeritus, on April 12, 2010, following a series of strokes. One of the historic figures of twentieth-century physics, Pound played a central role in several discoveries that have had immense consequences for science and our everyday lives. He was a man of broad interests, with a humanitarian concern for the beneficial uses of science.

Directly from college Pound joined the scientific war effort at the MIT Radiation Laboratory, contributing fundamental ideas and inventions essential to the development of radar, among them the broadband “Pound stub” coaxial support and the microwave cavity-locked “Pound stabilizer.” He wrote the book (literally) on Microwave Mixers. After the war he and his collaborators adapted these techniques (still widely used in radar and communications) to detect nuclear magnetic resonance (NMR) in condensed matter; it became a standard analytical tool in chemistry, biology, and physics. Further developments in NMR, to which several of Pound’s graduate students contributed, have given medicine the remarkable diagnostic tool now called magnetic resonance imaging (MRI).

Pound and his collaborators followed their NMR discovery with studies of nuclear relaxation, leading to the demonstration (in 1951) of “negative temperature” in nuclear spin systems. Such negative absorption in a system with an inverted population was the forerunner of the maser and laser, vital to advancements in information technology, communications, and medicine. In his 1964 Nobel lecture, Charles Townes referred explicitly to this “striking demonstration of population inversion and stimulated emission.”

Pound may be most widely recognized for using the Mössbauer effect to make the first accurate terrestrial measurement of the “gravitational red shift” in collaboration with his student Glen Rebka. Their experiment constituted the first test of Einstein’s Equivalence Principle applied to gravity’s effect on electromagnetic radiation near the earth’s surface. It had been widely assumed that such a test was possible only from enormous heights, for example from an orbiting satellite, given the tiny magnitude of the effect: a fractional shift amounting to a tenth of a millionth of a billionth part per meter of vertical height.

Pound recognized that the unprecedented narrowness of the recently discovered Mössbauer resonance provided the tool that made such a measurement possible, though hardly easy — the full effect over the 75-foot height of the Jefferson Laboratory enclosed tower was less than a thousandth of the natural width of even the astonishingly narrow iron-57 Mössbauer resonance. Pound and Rebka’s pioneering experiment was accomplished with such elegance, ingenuity, and accuracy that it has become a landmark in modern physics, familiar to every serious student.

Pound was born in Ridgeway, Ontario, on May 16, 1919. His ancestors had lived in Ontario since the Revolutionary War, when the family — Crown loyalists and Quakers — had crossed the Niagara River into Canada. When he was four the family moved to Buffalo, where his father taught mathematics, and where Pound derived joy from ham radio, mathematics, and tinkering with electronics. He attended the University of Buffalo, receiving a bachelor’s degree in Physics in 1941. There he met and married Betty Anderson, to whom he remained devoted throughout his life; their son John (Ph.D., Yale) has made a career in corporate governance and market policy. After the war Pound came to Harvard, where his election to the Society of Fellows served as a substitute for the formal Ph.D.

He loved things that exemplified ingenuity and scientific design, particularly if they defied convention, such as his full-suspension Moulton bicycle and hovercraft Flymo lawnmower. He was passionate about automobiles, especially those of British manufacture that complemented his tweed jacket, bowtie, wool trousers, and trimmed moustache.

Many of Pound’s graduate students remember him as the most important influence in their lives, and the finest scientist they have known. He was unflappable, amused and amusing, always in control, and always ready with a new idea. He loved puzzles, especially involving mechanisms. A student sought his advice when his car made a clicking sound, but would not start. “You have a stuck ring gear in your starter mechanism,” he said, prescribing the cure: “Just grab onto the rear bumper and push the car back and forth. You’ll hear a click when it slips back into place.” He did, and it did.

Pound had no sense of self importance. He equally enjoyed conversing with a car mechanic and with a colleague (with perhaps a slight preference for the former). He was thoughtful and generous towards his colleagues in ways deliberately not public. In 1954 it was Pound who collected funds for the legal defense of his colleague Wendell Furry, under attack by Senator McCarthy. In 1971 he personally funded the legal defense of a graduate student accused of political radicalism. In the seventh decade of his life Pound’s professional contributions shifted toward management of scientific research. He was a vigorous trustee of AUI, the organization responsible for the National Radio Astronomy Observatories and the Brookhaven National Laboratory. He remained always available to students and faculty alike for wise advice and encouragement, even for unpopular causes.

As his hair became silvery white, he grew a full, jovial beard to complement his ever-present moustache. Then one day he shaved the beard off because, he reported with a twinkle in his eye, while he had been walking through Harvard Yard someone had tried to direct him to a senior citizens event. The day after the beard’s abrupt removal he came home, even more delighted, to report that a colleague had stopped him to say, “You look different.” He had asked, “In what way?” After peering at him intently for a few moments, the colleague had smiled with discovery and had said, “You grew a moustache!” Pound’s eyes lit up every time he told the story.