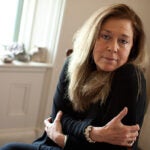 Cohen works to make institute a hub for Harvard’s Schools

Harvard’s Lizabeth Cohen recently began her first academic year as dean of the Radcliffe Institute for Advanced Study, where she was interim dean from July 2011 until her permanent appointment in March. Cohen is a scholar of 20th-century American social and political history and is the Howard Mumford Jones Professor of American Studies. She also was a Radcliffe Fellow from 2001 to 2002. Harvard Gazette staff writer Colleen Walsh sat down with Cohen for a question-and-answer session about the institute and her role in managing it. Cohen presented her inaugural lecture, “Place, People, and Power: City Building in Postwar America” on Oct. 15.

GAZETTE: How would you describe Radcliffe today?

COHEN: I would say that we are an institute for advanced study like many of our peers, which means that we are committed to promoting research and creativity, bringing people from all over the world to take advantage of the resources we make available to them to further their research, but that we have another component that is not typical for an institute for advanced study, which is we are very committed to sharing those ideas and those new ways of thinking with a variety of publics: Harvard faculty, Harvard students, but also … to a larger public. So it’s that translation, that intersection, that bringing ideas to a broad public that I think makes us distinctive. … [Also] we have from the beginning integrated the arts, and we have spanned all the fields. So we have scientists, social scientists, humanities scholars, as well as artists. And we also have people outside the academy: professionals, journalists, people in the world of policy. And that, I think, makes it a broader, more interesting conversation.

GAZETTE: How does your mission fit with that of “One Harvard”?

COHEN: In a world of tubs, we are the only tub that has as its mission the responsibility of bringing all the other tubs together and finding ways for them to communicate with each other, supporting faculty within the different tubs, but then bringing them into communication with one another. We encourage them when they apply for an exploratory seminar — for example, resources we make available to help them launch their research that their own Schools do not have to give them. We encourage them to put in applications that [include] faculty from multiple Schools, so we are encouraging a kind of cross-fertilization in our convening role at Harvard.

GAZETTE: What do you mean when you say you think of Radcliffe as, in a way, acting as Harvard’s front door?

COHEN: We go out of our way to say our events are open to the public. They are free to the public. We are encouraging all of our speakers to communicate well with people outside of their own specialization, and in that way I think of us as Harvard’s front door. We are welcoming, we are easy-access, and we take pride and pleasure in bringing people thinking the latest cutting-edge thoughts together with a larger public.

GAZETTE: What kinds of future goals do you have for Radcliffe?

COHEN: We certainly feel good about what we are doing … we have these three major program sites, the Fellowship Program, the Schlesinger Library, and what we call Academic Ventures, which supports the conferences and the faculty seminars, and seminars that former fellows initiate, and so forth. So there are these three pieces, but we have been working for the last year to try to integrate these three much better, and I feel pretty good about the progress we’ve made. It’s easy for people to be siloed. But we have been working on finding ways of crossing over. And so, for example, the website … is not set up actually around those three programs. It’s set up around people, programs, and collection. And all three of those programs contribute to each of those categories. So we are trying to look for the synergies within ourselves and not try to replicate the tub structure of larger Harvard.

GAZETTE: How do your plans involve the arts?

COHEN: The president has asked us to take responsibility for more generally convening around the arts, and we are doing that in a variety of ways. We have invited a faculty member named Yukio Lippit, professor of history of art and architecture, to be an adviser in the creative arts, and he will start that the year after next — he is on leave this year — and that is very exciting. We are trying to use the gallery that is in Byerly Hall, which was planned for an exhibition space for fellows who are practicing artists, trying to program that to be much more a part of the life of the institute. … We already do an annual exhibition that supports the theme of the gender conference in the spring. But we want to make more use of it, and so I do think the arts will be more present.

GAZETTE: Initially, you had no plans to stay on as dean. What changed your mind?

COHEN: It was a gradual process. I did accept, as a good Harvard citizen. I knew that Drew [Faust] needed somebody. I cared a lot about the Radcliffe Institute and the Fellowship Program in particular, since I had been a fellow and had benefited hugely from it. I cared a lot about the Schlesinger Library as a historian. It seemed like an appropriate thing for me to do, so I accepted. … Now, I have to kind of laugh when I think back to how completely strange it was for me to even be in an office like this on a daily basis. I didn’t even have any systems. I had this little notebook that I bought, and I would mark it for all the people who were my direct reports, and then write little notes in it for all the things I wanted to say to them. … I had not ever been in this kind of a job. But over time, I would say there were many things I discovered I enjoyed that were not part of the kind of work I have been doing.

GAZETTE: Can you describe some of those things?

COHEN: Working with people more collaboratively than a typical professor does as a historian — this would not be true in all fields, [but] historians work independently, pretty much. … Basically, we work on our own. … I also enjoyed program planning. I did have a life before I went back to graduate school, working in museums … doing some of the things I have been enjoying a lot in this job, thinking about how to communicate ideas to the public, how to take ideas that historians, art historians, scientists, or political scientists speak to themselves about in fairly technical terms, and figuring out how to really make that exciting and accessible to a larger public.

GAZETTE: Is there any part of your new role that surprised you?

COHEN: I actually learned to enjoy a piece, which I thought I was going to hate, which was the fundraising side. I thought, “This is going to be awful. I don’t like to ask anybody for money. How am I going to do this?” … I actually discovered that I enjoyed it. I did. I was really surprised. I actually realized that the people who stay in touch with the University that they went to many years out are people who are still hungry for ideas and want to be stimulated, and they are wonderful to work with.

GAZETTE: Can you describe what alumnae relations are like these days? Has there been anything lost or gained with time?

COHEN: I think that that struggle is really behind us by now. That was the theme during Drew Faust’s deanship during the first five years. There was an awful lot of endless discussion about why Radcliffe College didn’t make sense as an institution and why Radcliffe Institute was a desirable use of those resources. At this point, we are 13 years down the road. …  And now we are more focused on how to make the Radcliffe Institute more valuable and important for Harvard.

GAZETTE: What do you do for fun?

COHEN: I used to have fun [laughing]. Now I have to find my fun in my work. I have to say that I haven’t figured out yet how you have leisure in a dean’s job at Harvard. … When I do have time, I have a lot of interests. I love to read novels. I love fiction. I learn a lot about writing from how I react to writing that I enjoy. I like to garden. I love traveling. I am trying to weave that into the job. … It is a struggle. It isn’t just being a dean at Harvard. I think this is a problem for lots of people in demanding jobs in the 21st century, because you can always be working. The emails don’t stop, any time of the day or night. You have to impose your own structure of when you are working and when you’re not. And the “not” is the part I am having a hard time with [more laughing]. I am also still learning the job, so it will hopefully get easier.